Go Back From Wentz Ye Came: Carson Wentz Back In The NFC East

A familiar face is back in the NFC East. @ReflipeWThenuz breaks down the Carson Wentz trade and some of the early winners and losers. 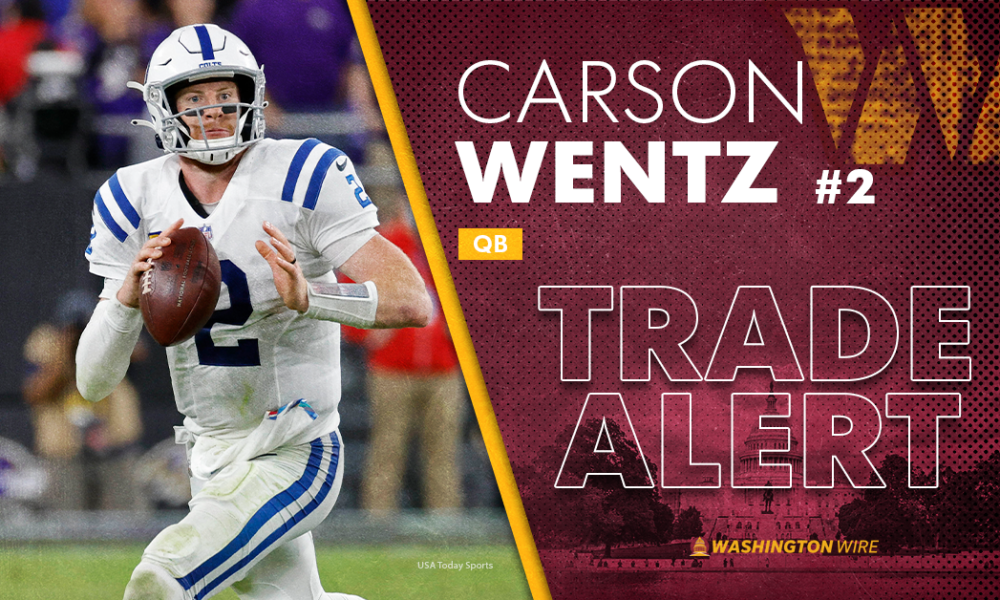 On Wednesday, the Indianapolis Colts made good on what they had been saying all off-season and jettisoned starting QB Carson Wentz. They unceremoniously shipped off former Eagles 1st round pick to the Washington Commanders for a package of picks. The Colts will receive Washington’s 2022 3rd and a conditional 2023 3rd, which will become a 2nd if Wentz plays 70% of the snaps. The team’s also agreed to swap 2022 2nds as part of the trade. This move will have ramifications for the league and your dynasty squads. Let us take a quick instant reaction look at the fallout from this latest QB move from the NFL and determine some winners and losers.

Despite a slew of negative press this off-season and last, Carson Wentz has been an above-average QB over most of his NFL career. Aside from his final season in Philadelphia and his rookie year, he has been a fairly consistent performer for his team. You can see in his numbers below that he routinely boasted a quality QBR, including last year when he was actually tied with Russell Wilson, of all people.

Once upon a time, Carson Wentz was a legitimate NFL MVP candidate. It has been some time since that amazing sophomore season, and he has never achieved the same success he did pre-injury. Nevertheless, he has still managed to put some quality snaps on film. As I mentioned above, he literally had the exact same QBR as Russell Wilson last year. After losing out on Aaron Rodgers and Russell Wilson, the Commanders went after the next best name on the market. Some may argue that Jimmy Garoppolo was that next guy. However, recent reports of his physical health and the need for offseason surgery may have caused a change in direction for the Commanders.

The most obvious winner of this trade is Carson Wentz himself. The former 1st round pick will be on his third team in his last three years in 2022. However, Washington believed in him enough to spend fairly significant draft capital on their former division rival. They also picked up his considerable salary. The Commanders are angling for a playoff appearance with the birth of their new brand, and Wentz provides them with the best avenue to that outcome. He will receive every opportunity to cement himself in the nation’s capital.

While you can argue that Indianapolis is a better squad, it is debatable. Washington is a quality offensive unit with an above-average offensive line and established skill players at every position on offense. Wentz is likely beginning his last legitimate chance to be a franchise QB, but it is a legitimate chance nonetheless. Provided he is healthy, Wentz should again be a QB2 in 2022.

Despite some of the negative attention Wentz has received, he will be a good addition for Terry McLaurin. The former Ohio State speedster has been an extremely productive WR ever since being selected in the 3rd round of the 2019 NFL draft. Speed is McLaurin’s calling card, and Wentz has been able to make good use of these types of players in the past. Wentz should help provide a stabilizing presence in the Washington huddle, likely eliminating some of the turnovers they saw last season under Heinicke.

Heading into a contract year, I fully expect Scary Terry to continue to produce high-end WR2 numbers with Wentz under center. Last year McLaurin saw his yardage and catches decrease despite an almost identical amount of targets. A more accurate passer than Heinicke, Wentz should increase the quality of the targets leading to better overall efficiency and numbers. For example, last season Wentz’s WR1 in Indy, Michael Pittman Jr, averaged 14.04 ppr points per game vs. 12.56 from McLaurin with Heinicke at the helm. That number for Terry was a career-low and over a full point per game less than his rookie year. Simply put, Carson Wentz will be the best QB Terry has played with since entering the NFL.

There may not be a bigger winner in this move than Washington TE Logan Thomas. The converted former QB struggled through an injury-ravaged 2021 season. However, during his prior breakout campaign of 2020, he was a surprise TE1 in fantasy. He is big and athletic and possesses the mind of a former QB. He should return to a prominent role in the Commanders system in 2022.

Fortunately for Thomas, Carson Wentz loves to target the TE position. Going back to his days in Philadelphia, the former NDSU QB routinely fed his TE with targets all over the field. It was while playing with Wentz that former Eagle Zach Ertz set the NFL record for catches in a season. Provided he is fully healthy, I expect Logan Thomas to enjoy a career year being paired with Wentz.

The biggest loser from the Commanders team will undoubtedly be Taylor Heinicke. The former Old Dominion signal-caller enjoyed some success last year after losing opening day starter Ryan Fitzpatrick in Week 1. Heinicke made some splash plays but faltered down the stretch. The Commanders limped to the finish line, dropping 4 out of their last 5 games after appearing to be in a position to challenge for a playoff birth. I can hear the collective grunt of D.C. fans and Wentz detractors alike saying that Wentz did a very similar late-season swoon in Indianapolis last season. However, as NFL Network’s Michael Florio points out, Wentz’s numbers were simply better, especially on deep passes.

It is too early to tell the long-term ramifications of this trade. However, as it stands today, Michael Pittman Jr. is the biggest loser on the Colts roster. The former USC star enjoyed a career breakout last season while playing with Wentz. Say what you will about the QB, but he did an admirable job of getting his WR1 the ball all season long. Pittman had begun to build some legitimate chemistry with his QB and had already started offseason workouts with Wentz, as you can see below.

It is entirely possible that Pittman could end up with a better QB situation in 2022. However, it is also possible that he could end up in a worse position. Pittman had developed a good relationship with his QB, one that could have developed moving forward, but at this point, we will never know.

At this early stage, views on this trade are all over. Most people seem to believe that the Colts got the better of the deal, given their outspoken desire to rid themselves of their mercurial QB. It is possible they may have even cut Wentz before a large portion of his guaranteed money was due this month, leaving the Commanders to sign him without giving up a single asset. A rift had clearly developed between Wentz and various unnamed parts of the organization. After missing out on the other top QBs in the market, Washington did not want to risk being the kid at the dance without a partner. They opened up their wallets and paid the Colts giving Wentz one last shot.

Perhaps the move back to the NFC East will spark a renaissance for Carson Wentz. At any rate, the cost of acquiring the former MVP candidate was far less than what Denver paid for Russell Wilson or what Houston is reportedly asking for Watson. Washington could also look to the draft to hedge their bets against this move. As for Indianapolis. There is still a shoe to drop. We do not yet know how this move will pay off. The Colts were willing to eat the sunk cost on Wentz to move on. Sometimes it is not always greener on the other side. Only time will tell how this deal plays out. Keep an eye on Indy as they will surely be players in the QB market moving forward.

Thank you for reading this article! Please be sure to join the #Nerdherd, so you don’t miss out on any of the amazing things we have to offer at Dynastynerds.com. Use my promo code DynastyHolliday for a 15% off discount. You will get rankings, extra podcasts, and access to our rookie film room. For just a couple of bucks more, you can get access to our revolutionary DynastyGM tool. So much for so little, why miss out on all the fun. Also, you absolutely must check out our new mock draft tool. Find it in your Apple & Android app stores. Follow me @ReflipeWThenuz for more dynasty content and other musings.