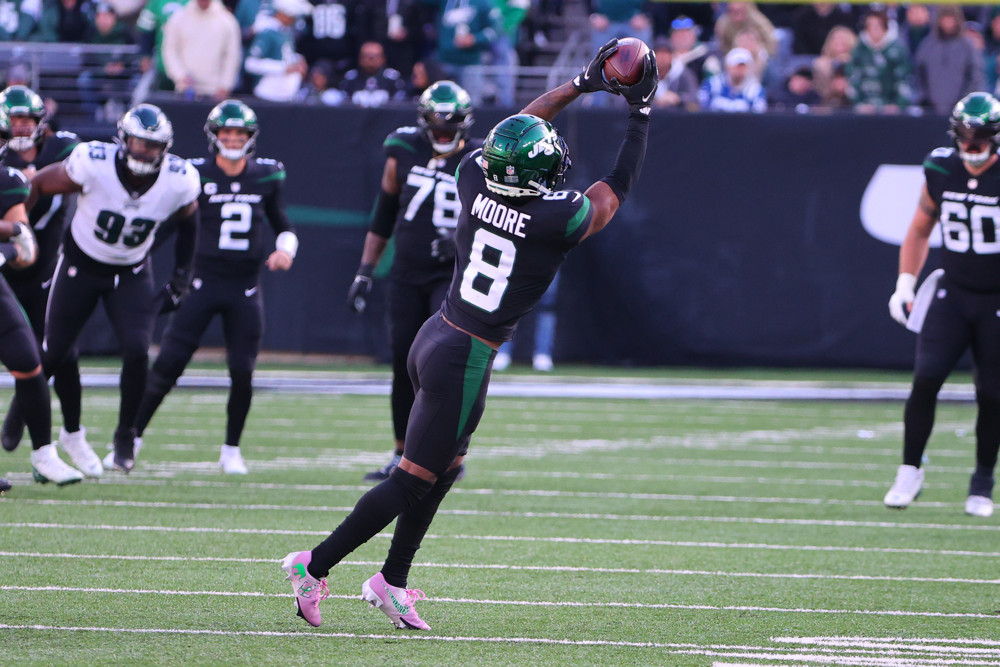 To keep our finger on the pulse of the dynasty community, I have included this week’s players with the most significant moves in value determined by consensus rankings. A value-above-replacement “Reserve” system derives player value. The system values a “start 9” non-SF 12-team league, with each starter’s back up for a total of the top 216 (18*12) players. See my previous article on how to value players to further understand this system. The below summaries show the new value in dollars, the change in value in dollars, and the % change in value for each player. Note that rankings become available each Friday. There is a natural lag in this data which will not include the player’s current week’s performance.

Pierce continues to rise sharply in value, with Rex Burkhead being pushed to the side in their competition for snaps. This fourth-round NFL draft pick has elevated his fantasy value handily to a very late first-round rookie pick. KTC has him even higher as a 2023-mid-first. Even at his current cost, which already exceeds his pick value, a young running back with this opportunity is easily worth the cost. In his last three weeks against favorable matchups, Pierce has averaged 20 rushes for over 100 yards and picked up a touchdown in each. He has also added to the passing game with 11 completions on 13 targets over that same span.

Whether you believe in the player, running back is a situationally driven role. It’s clear he has the bell-cow role in Houston, and I value opportunity over talent at running back. If we look at per-game metrics, he’s 11th, with Jamaal Williams’ fluky start ahead of him and Breece Hall above that. If the choice is to spend three times as much for Hall or get Pierce, it seems pretty reasonable. The mispricing breaks down further when we look at older players. If the argument is that Pierce may not be a long-term starter, you can use that same logic on older players who will be irrelevant soon. Pierce tops Cook, Kamara, Mixon, and Jones in per-game averages. Every one of those players is currently ranked higher than him in dynasty value. This makes no sense unless you believe the player is of little talent and just lucked into this role.

This is a clear move to a younger player, even if you are competing. You rarely get the opportunity to add potential career span and maintain production. The only caveat would be to see how Pierce holds up against better defenses. He will be challenged shortly in the next stretch of games, but the production will likely continue.

Rhamondre Stevenson has had a fortunate start to the season. He has gained from both favorable matchups and with Damien Harris effectively missing the last two weeks due to a hamstring injury. In the four games played together, Harris logged about a 40% snap share to Stevenson’s 60%. However, with Harris out over the last two weeks, Stevenson saw snap share reach 90%.

Both backs have put up solid production, even on limited snaps. However, the return of Harris will surely hamper Stevenson’s upside moving forward. This seems like a classic overreaction in dynasty pricing. There is no sustained thought that this backfield won’t be a committee approach moving forward. At his current price, I would be more apt to target Montgomery, who had many setbacks this year but has shown solid production when the environment allowed for it. His price also sits just below Jacobs’, who is 4th in per-game production.

Sanders is currently the 13th-ranked running back on a per-game production basis. He has moved up to RB24 in dynasty from RB27 at the start of the year. After finishing 14th overall in his rookie season, he fell to 24th and then to 44th in PPR formats missing some games during those years. He is seeing about 65% snap share and relying on touchdowns for fantasy relevancy. With Hurts a risk to vulture touchdowns and AJ Brown as a red zone threat, his value is tied to Philly’s high point totals. He seems appropriately priced with potentially more downside than upside risk due to Philly’s hot start.

It is rare to see a quarterback make this list. 1QB leagues just don’t allow for a value shift as this position. Herbert came into the years as the third ranked dynasty quarterback and remains there currently. However, he was up in value after a solid start, posting big numbers in three of his first four games. The down game came after suffering a rib injury in the Week 2 matchup against the Chiefs. Week 5 saw another down week on low passing volume and only one touchdown. He followed this game up with huge passing volume, going 37 for 57. However, he failed to score a touchdown and threw an interception. This was only his fourth game with more interceptions than touchdowns in his 38-game career.

Now with back-to-back poor performance, his value has come back down. I don’t think there is any cause for concern in his long-term value as he may still be dealing with the injury to a lesser extent. I also doubt any managers are worried, so there is, unfortunately, little ability to buy low. Keep an eye out through the remainder of the season to see if his value continues to fall, leading to a buying opportunity.

Elijah Moore seems to have officially lost his status as the WR1 for the Jets. He garnered 87% to 94% snap share in the first four weeks of the season. Moore failed to reach double digits in any of those games and has now slid to the low 60s in snap share. Week 5 saw his targets remain flat at four and then fall to zero in Week 6. This is a nightmare scenario for the perceived breakout candidate. Rotowire has reported that as of Thursday, he took a personal day and has requested a trade. The second year player is the 76th-ranked wide receiver through Week 6, having fallen way behind rookie Garrett Wilson who I highlighted recently.

While struggling to stay on the field in his rookie year, we saw huge games out of Moore. I find it hard to believe that this second round pick is playing at the level we would expect moving forward. I see a bit of an Aiyuk parallel in this sophomore slump. Aiyuk and Moore saw a huge target volume that fell off in year two. There are also some parallels to Claypool’s touchdown dependency with Moore’s five touchdowns in the seven-game stretch of relevancy prior to his injury last year. I am unsure if he is worth targeting as he may fail to reach a level more than a fringe WR2, but as a rebuilding team looking for variance, this seems like a golden opportunity.

The Cam Akers saga continues this week with Rams coach Sean McVay looking to find him “a fresh new start with another team.” While the Rams acknowledged that they haven’t ruled out “reintegrating him into the offense,” it appears a trade will be best for both sides. As a highly touted 52nd overall pick who performed well late in his rookie year, his value was ascending quickly. The Rams even played him late last year after returning in an inhuman six months from an Achilles surgery. To see the Rams now with no desire to play him is pretty astounding.

Akers is now ranked 91st overall, falling from 22nd before his Achilles injury. KTC has him valued at about a late second. I approach this from two sides. Does Cam still have the upside for his value to go up to that of a starting running back again? The initial thought was the Achilles injury was a death sentence at the position, but we have seen James Robinson also rebound rather easily from this injury as well now. So if the Achilles injury can be ignored from the equation, it just comes back to the player. We have seen him perform in the past, albeit from a small sample size. He has only seen a 50%+ snap share for five games in his career. However, we may have a combination of frustration from current managers and a low enough cost that this can be a winning trade.