Week 6 is in the books. @JohnnybgoodeFF takes a look at the week’s injuries and impact going forward 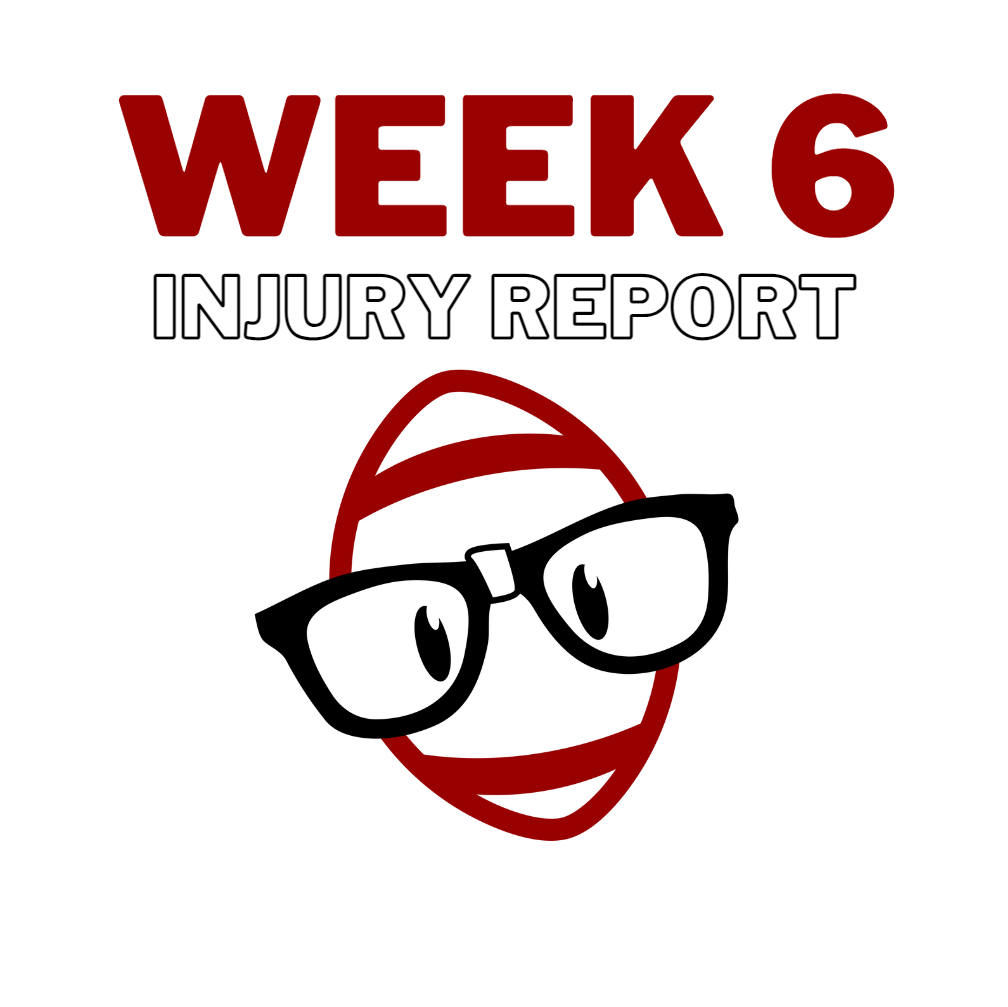 Pickett suffered a concussion during his Week 6 matchup and now enters the concussion protocol. I expect Pittsburgh to be conservative with their first-round quarterback and put him at 50/50 to suit up this week.

Wentz underwent surgery to repair a fractured ring finger on Monday. This leaves the Commanders quarterback on the shelf for an estimated 4-6 weeks. The ring finger isn’t as important in gripping/throwing a football, so the timetable seems reasonable. I would expect him to return without many difficulties, wearing protection of some sort to keep the finger from being reinjured.

Wilson was already dealing with a strained lat, and now he has a hamstring injury on the same side. Using the concept of “Regional Interdependence,” the theory that the strained lat may have resulted in a “compensation injury” is plausible. Regional Interdependence basically means muscles/joints in similar regions can affect each other; an injury to one area can produce pain in another area as that second area compensates for the original site of injury. The lat originates at the pelvis, and the hamstring also originates at the pelvis. While they have very different jobs, it’s reasonable to say that one may work harder to compensate for the other. This injury should leave Russell on the sidelines and give him enough time to recover from his lat and hamstring injury.

Dobbins had a massive injury to his knee last year, which required extensive surgery. It’s become obvious to me that social media concern about Dobbins’s knee this preseason had some validity. He is dealing with knee tightness not even three games into the season. I was a cautious buyer (RB2 price) on Dobbins this offseason, but now I have moved to more of a pessimistic outlook. He has been great when Baltimore has given him 10+ carries. I’m not sure how realistic a consistent 10+ workload is for him in Baltimore to put him in the RB1 discussion. Lamar Jackson siphons many of the rushing opportunities, Baltimore doesn’t seem to want to give one running back that kind of workload, and Dobbins’ knee may have other plans. He may be more of a candidate for a positive 2023 campaign, but he is a sell for me at the moment.

pic.twitter.com/I8hwUKVT7T #Cardinals Marquise Brown injury that caused him to go straight to the locker room #AZCardinails

This has been a perplexing injury, as it was first reported to be season-ending, then it wasn’t. First no fracture, and now there is a small fracture. If you recall, Brown had suffered a Lisfranc injury during his final college season. I remember writing in a certain forum about how Brown’s injury at the time was significant and gave me pause on drafting him. His previous injury put him at a greater risk of re-injury to the same area. It appears that may have been the case here, but it’s hard to say with the information available. I expect Brown to miss at least six weeks, possibly two months, as he recovers. This puts him back roughly around Week 14 following the Cardinals’ bye week. I would not recommend counting on Brown rest of the season for fantasy as I would expect him to be eased into action to make sure his foot can handle the activity demands. Depending on Arizona’s team outlook, they may even choose to shut down their newly extended franchise wide receiver for the season.

Cobb suffered what looked to be a very classic mechanism of injury for a high ankle sprain. Tests after the game confirmed the injury. Position players typically struggle the rest of the season following their return from this injury. Temper your expectations for Cobb once he returns.

Most were unaware that Waddle even hurt his shoulder until after the game. The possibility here is that Waddle suffered a labral tear with his subluxation. This is a somewhat common injury to occur with a dislocation/subluxation. Tee Higgins suffered something similar last year and had it repaired in the offseason. I would expect Waddle to follow the same process, assuming he did suffer a torn labrum. The larger problem is that, with each subluxation, there is an increased chance for future subluxation. Dalvin Cook managers may be familiar with shoulder subluxation/dislocations and what that can mean for future re-injury risk.

Scary injury for Cameron Brate but good to see him moving and giving the thumbs up sign pic.twitter.com/hRxvTApFTy

Brate suffered a rather scary injury during Week 6. Following his injury, he was in obvious pain, grabbing his helmet, and was carried out on a backboard. While X-Rays were negative, I would expect Brate to miss multiple weeks.

Schultz was slated to return this week but tweaked his knee on Saturday. Back on my Week 2 “That’s Going to Leave a Mark” injury report, I noted that these injuries can linger throughout the season. This is a classic example of how a PCL injury can rear its ugly head as an athlete ramps up their activity. I would exercise caution with Schultz as he works to return from this injury. We should expect his knee to be somewhat bothersome for an extended period.