Finding the next Jameson Williams or Kenneth Walker III will help you find success in Devy and C2C. Here are three players primed to have a meteoric rise in 2022. 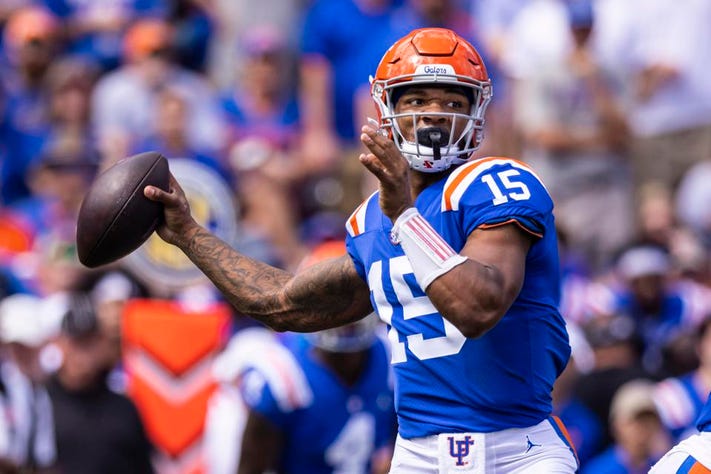 At this time last year, Jameson Williams was buried on the Ohio State depth chart, Kenneth Walker was off the fantasy radar, and Malik Willis was not in the QB1 conversation. Welcome to the start of the 2022 College football season! Spring camps are winding down and finishing with spring games.

What does this mean for Devy and Campus to Canton (C2C) leagues? Draft season is right around the corner, and fantasy players are returning after a short hiatus to recharge their batteries. This is the time to take advantage and revamp your lineup in preparation for next season. Who will be the Willis, Walker, and Williams of the 2023 draft class? Let’s check out a few players primed for a big season.

Richardson is the type of QB that forces NFL teams to fight for the first overall draft pick. His size-adjusted athleticism is off the charts at 6’4” and 236 pounds. According to Recruiting Analytics, Richardson reached a max speed of 21.6 MPH against FAU last season.

In addition to elite mobility, Richardson possesses a powerful arm that gives him the ability to make any throw on the field. During the Florida Spring Game, he showed a rapid release, excellent decision-making, and the ability to manipulate the defense with his eyes. He will need to take these improvements into the Regular Season when Florida will have to navigate the SEC. Richardson will enter the 2023 NFL draft as a Top 3 QB with a strong season. NFL teams will have difficulty passing on a QB with his tools.

Tucker is an RB that seems to be forgotten in the loaded 2023 draft class. It is easy to see why with players like Bijan Robinson, Jahmyr Gibbs, Zach Evans, and Tank Bigsby. Do not allow the lack of “buzz” to get in the way of acquiring a superior talent like Tucker. The combination of size and speed that he provides is incredible. In addition to football, he is a sprinter on the Syracuse track team participating in the 60m dash. That “track speed” is visible on the football field as Tucker is a threat to take any touch to the house.

Tucker is in a position to improve upon an already successful true sophomore season at Syracuse, where he rushed for 1,496 yards and 12 touchdowns. He accounted for 82% of the rushing market share (RBs), 39% of the team offense, and 36% of the team touchdowns. Tucker only had 20 receptions last season, which is a concern. His 13.8% receiving market share is quite good and indicates that he can be a factor in the receiving game at the next level. Unfortunately, Syracuse is a low-volume passing offense, so it’s 13.8% of a small pie.

Johnston is the prototypical “Alpha” WR every NFL team covets, standing at 6 ‘4” and 200 pounds, and he is an imposing force. NFL teams are still reeling from the mistake of passing on guys like DK Metcalf and Tee Higgins; Johnston is the next WR in that mold. He attacks defensive backs off the line of scrimmage, using his speed to place pressure and get them on their heels. In addition to his speed, Johnston gets in and out of his breaks well and uses his large frame to shield defenders from the ball.

With just 600 receiving yards last season, Johnston does not seem to stack up against other 2023 eligible WRs in terms of production. This is a situation where “context” matters, TCU fired the coaching staff mid-season, and QB play was atrocious. In November, TCU hired Sonny Dykes (Formerly of SMU), bringing a pass-heavy system and philosophy with him. Johnston has already shown the ability to put the team on his back; check the Oklahoma and Baylor games.

The ability to project players moving forward is essential for both Devy and C2C leagues. Projecting a player’s breakout based on situation, talent, opportunity, etc., gives fantasy managers the ability to acquire those players at a fraction of the cost. I am projecting these three players will be significant risers up NFL draft boards during this season.