Are you doing a start-up dynasty draft? What about just wondering where your RBs rank if you were to draft? Well, Check out @Darthdbacks Start-up RB Rankings to get those questions answered! 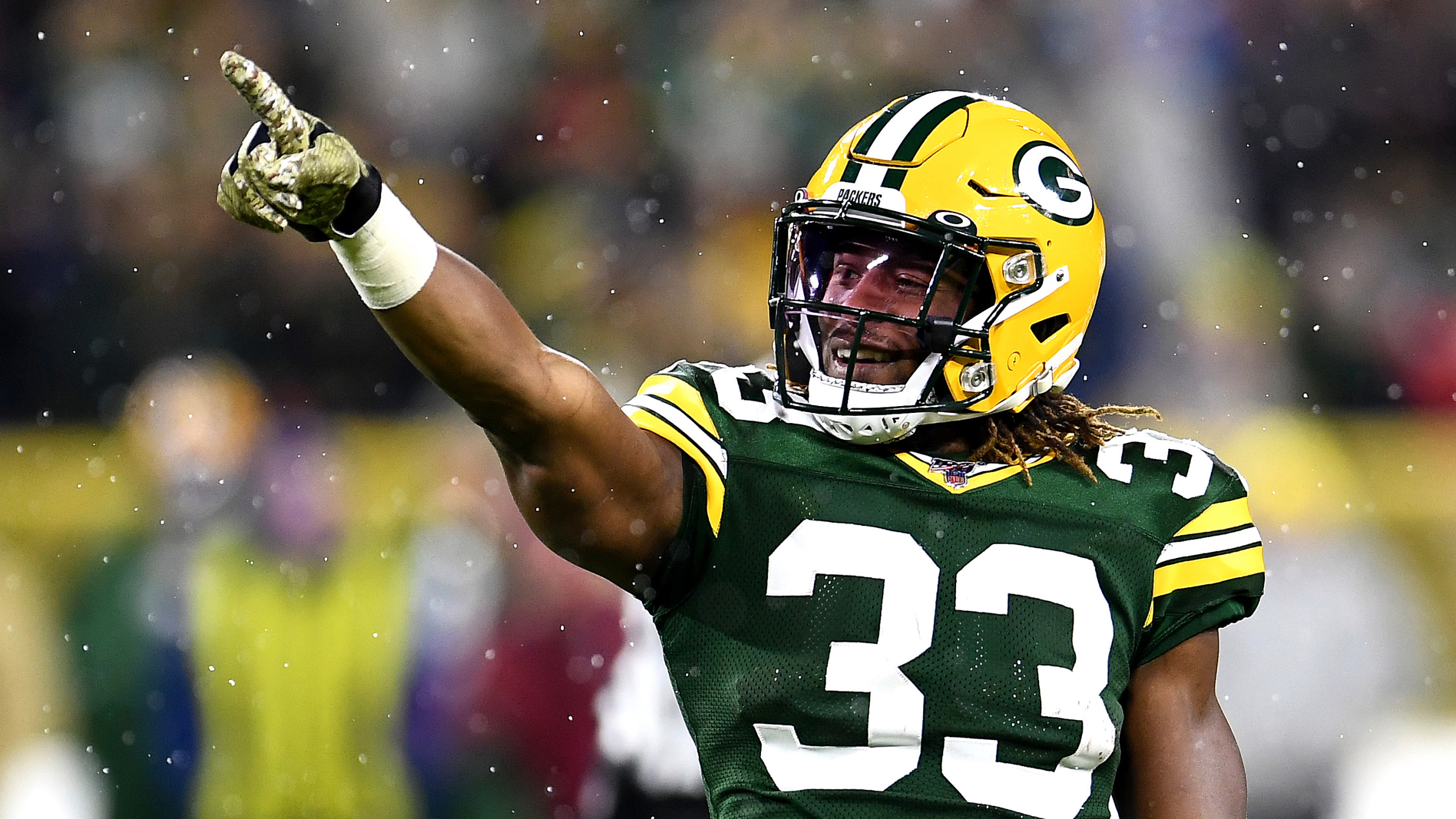 It’s start-up season for dynasty leagues. I’m actually drafting in a start-up dynasty league right now. As such, I thought it might be helpful to let you all know some tiers to draft the RBs in. I am presenting these rankings in tiers. By grouping similarly valued players together, it allows for flexibility. For example, if all of my Tier 2 RBs are still on the board when it is my pick, I may be willing to move back and still get one of the RBs in my second tier.

I’m looking at PPR leagues for these tiers since that’s what I play the most. I find it to be the most common as well. Plus, these are just guidelines for what I think these backs will wind up as come the season. It reflects their price as well in terms of rounds and trades. The higher the tier, the higher you will have to take them in the draft. Like Jonathan Taylor is going mid-1st or late-1st in SF PPR leagues. With preparation, you can draft an amazing team. So, let’s take a look at some tiers of RB Rankings!

Jonathan Taylor: Well, who else did you expect at the top? He’s the clear RB1 in dynasty right now after a massive season last year in which he rushed for 1,811 yards, 18 TDs, 40 receptions for 360 yards, and 2 more TDs. Combine that with him being in a Colts offense that is rush-oriented with a fantastic o-line, and being only 23 is enough to make him #1 in the RB Rankings.

Christian Mccaffrey: Yes, he had injury issues the last couple of years. Despite that, you can’t predict injuries, and they aren’t the type that should be a reoccurrence. He’s 25 and arguably the best RB in the game when it comes to the whole package. He blends pass-catching and rushing like no other back. He should age gracefully and is still the potent weapon in the Panthers’ offense.

Austin Ekeler is ranked this high because he’s proven he can rush well while providing elite receiving ability. He has one of the best QBs in the game in Justin Herbert, who will provide plenty of scoring opportunities and has a clean bill of health history. Plus, he’s only 26 and should age well with limited touches earlier in his career. As for Najee? Well, he only finished as a high-end RB1 his rookie season. Javonte nearly finished as an RB1 while in a timeshare with MG3, which makes me wonder how much he will score now that he’s alone! Either way, Javonte’s a young stud that will be competing with Najee for RB1 of the 2021 class for years to come.

Alvin Kamara: While AK47 is likely to miss time this year due to suspension, he will be fed upon return and is still only 26. He has a few more RB1 years left with no significant injury history.

In this tier, I mixed the vets that still are young enough to provide you with multiple RB1 years and youngsters that have all the talent in the world but haven’t quite put it all together. For Swift, he’s a supreme pass-catching back that can rush well and is behind a great OLine. However, he’s having QB issues, so he’s not getting as much PPR work. Still, he’s an RB1 in PPG and is only 23. Give me those 5+ years of work. In this case, Chubb is the #1 rusher for a rush-heavy team and will continue to get fed the ball a ton. Plus, he’s 26 and should have a couple more years as a lead back.

Mixon is a pass-catching back with zero competition on a top-flight offense for the Bengals. He’s still 25 and should be good for your team for at least three more years. Jacobs should be finally featured as the leading back for the Raiders. He finished as RB1 multiple times. Furthermore, he’s only 24 and will give you 4+ more years.

J.K. Dobbins: Yes, Dobbins is recovering from a torn ACL. Despite that, he will be the lead RB in a rush-heavy offense that will seek to protect Lamar Jackson after he missed a lot of time with injury, and better yet, Dobbins is only 23. He’s going to be good.

This RB Rankings tier, besides Dobbins, is about the vets. I want to rank Dalvin Cook higher, and he’s a solid RB1. However, he’s about to turn 27 and has a significant injury history. Plus, with a new system in place for the offense, we don’t know how Cook will perform. Saquon Barkley dealt with a severe knee injury and struggled in his return last year in a terrible offense with the Giants. There’s hope the offense performs this year, but we don’t know how Coach Daboll will use Bark. I’m a big believer in his talent. Just not sure he will perform the way he should be. At least he’s 25.

David Montgomery is in a weird spot. A new offense and QB is on the helm with a hopefully improved OLine? Monty’s a reliable late-end RB1, high-end RB2. However, we don’t know what his passing work will be like. Plus, we don’t know if the team feeds Herbert or if Fields takes any rushing/goal-line work away. He’s a good back, but he’s entering his last year of the contract.

As for King Henry? Well, he’s already 28 and coming off a nasty foot injury. Thankfully, he got back in time for the playoffs, but how much longer does he have. Due to his freakish size at RB, he should age gracefully as he was on the path for another 2,000-yard season last year prior to being hurt. Despite that, he gets little passing work. He should be good for another year or two for those that want to win in year one.

Cam Akers – Cam Akers is a worthy pass-catching back with a talent for rushing. However, he will lead the RBBC for the Rams and is still recovering from a Torn Achilles. Despite that, he’s young (22) and should compete to be an RB1. The lead back for the best offense in the NFL is always a good thing.

Leonard Fournette is 27 but is a proven PPR machine with Tom Brady. He will get fed tons of passing work. Lenny is set up to be the primary RB in the Bucs’ offense after signing a 3-year deal. Thus, why isn’t he higher? Well, besides his age, we only know for sure that Brady is playing this year. Past that, we don’t know what type of QB will be there for this offense or Lenny. AJ Dillon is in a timeshare with Aaron Jones for one more year. Dillon will explode a year from now as he’s the featured back. He’s everything you want in an RB. He’ll provide flex numbers this year, but the wait is worth it.

Elijah Mitchell is the lead back in the 49ers’ RBBC scheme. Despite that and injury issues, he proved himself a capable every-week RB2. Seeing as how he’s 23, he has many more years left to be a leading RB for one of the run-heaviest teams. Mitchell will be an RB2/3 for years to come. The same can be said for Etienne as he returns from his foot injury that wiped out his rookie year. He’s partnering with his college QB in Lawrence and new coach Doug Pederson to be the main RB in a new offense. We know he will get tons of passing work, but when James Robinson comes back from a torn Achilles, will he get the rushing work?

James Conner – Conner’s set up well to be the star RB for the Cardinals offense for years to come. He’s proven he is healthy. If he continues to score TDs near last year’s rate, he’ll contend for an RB1 finish every week. The only danger is his injury history and the fact he’s 26.

Zeke is a good back, but it’s clear his RB1 days are slowly becoming a day of the past. With Tony Pollard rising more and more every year, Zeke is slowly becoming the RB2 in the Dallas offense. He’s still the lead dog for this year, but what about next year? He will be used. Just expect him not to get as many yards and be more TD-reliant than in the past.

Aaron Jones has one more year, at least, tied to the Packers and Arod. After that, Jones will most likely be released due to cap reasons. Thus, you get an RB1 for one year, but what he does after that is unknown. He’s a great back but will be 28 when he is a free agent potentially. We see what MG3 is getting on the market right now. What will a slightly more proven Aaron Jones get? I like stability, not question marks. Michael Carter is a wildcard with the Jets. He’s shown potential, but I don’t know if he will ever be anything more than a late-end RB2. He doesn’t get enough passing work and will be TD reliant.

Give me a follow on Twitter @DarthDbacks. I love to talk football, baseball, movies, shows, Star Wars, Marvel, and of course to interact with the fantasy football community. For more articles of mine, click here.