Got a dynasty startup draft coming up? @andy_buckler takes a look at his top-30 dynasty WRs and let’s you know the order you should look to draft them! 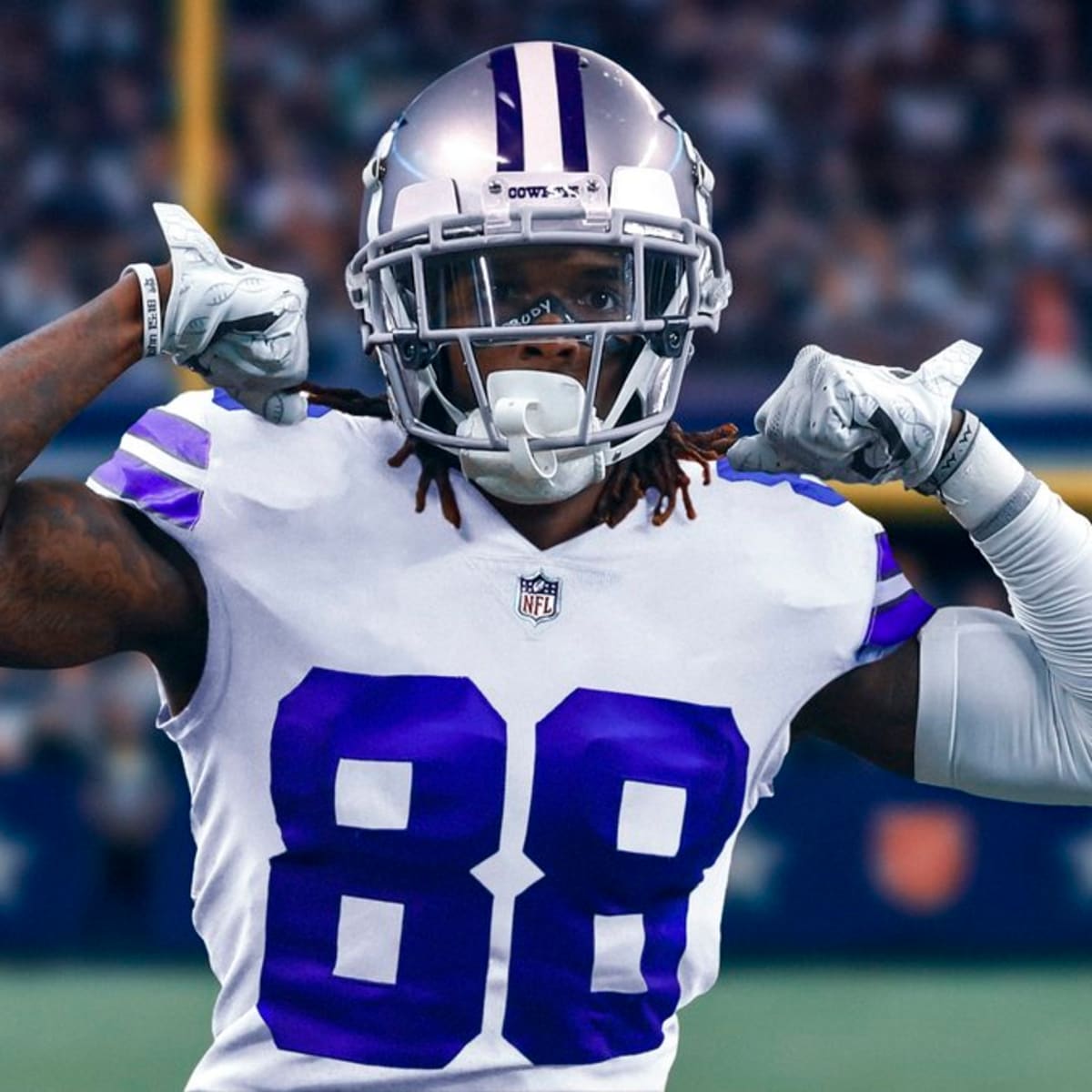 Dynasty Startup season is right around the corner, and it’s essential to go into the Startup with positional rankings to help build your team and navigate the draft. When building my rankings, I like them to consist of three things: talent, age, and production. My rankings are also based on a two to three-year window, which I believe is the perfect way to analyze dynasty fantasy football. Now let’s get into my top-30 WRs!

It was a down year for Sutton coming off an ACL tear he suffered last season. Sutton showcased his elite skills for the first half of the season while Jerry Jeudy was on IR but couldn’t seem to hit stride while they were on the field together.

A lot of that can be attributed to poor QB play. The Broncos should look to make a massive splash at the QB position this off-season, which will only improve Sutton’s stock. I’m willing to bet on talent and draft Sutton inside the top-30.

Hollywood had a true third-year breakout, finishing as the PPR WR22. He was able to command a true alpha target share of 27% in an offense with legitimate target competition. Top-12 upside is well in the realm of possibilities for Hollywood.

Bateman was the WR2 for many in his draft class. While he didn’t quite live up to that in his rookie season, he still showed promise. Bateman missed the first five games of his career due to an injury he suffered in camp.

He was able to post three games over 80 yards, but with the emergence of Mark Andrews and Brown, pass volume is a concern for Bateman, but the talent is undeniable.

ALL. HE. DOES. IS PRODUCE. Evans captured his eighth straight 1,000-yard season in 2021 to go along with double-digit TDs (14). Evans is one of the best to ever do it and remains a dynasty value going into his age-29 seasons paired with TB12.

Jeudy looked primed for a breakout in Week 1 when he posted six catches for 72 yards before injuring his ankle. The injury caused him to miss six games, and he never got back to normal. Denver is in desperate need of a QB upgrade to unlock their offensive weapons, but I still believe in the talent of Jeudy.

Aiyuk started the season in Shanahan’s doghouse but was able to bounce back strong. Aiyuk finished the season averaging 69 yards per game and 13.1 PPR points from weeks 9-18, setting himself up for a third-year breakout.

It wasn’t the big year two breakout we expected from Claypool, but he still flashed his elite playmaking ability. He averaged 15 yards a reception, but it came down to TD regression. After scoring 11 as a rookie, he put up just two TDs in 2021. His play style doesn’t fit the aging Big Ben, but with Ben set to retire, Claypool can truly take off into the elite tier with a QB upgrade. Claypool is my number one off-season dynasty buy-low.

Amari Cooper had a disappointing season finishing as the WR27 in Full PPR. It’s been a roller coaster if you roster Cooper in dynasty, but he is still just 27 and should be a low-end WR2 for the next few seasons.

Calvin Ridley is a top-8 dynasty WR if his situation was more apparent, but as of right now, it isn’t. After appearing in just five games, Ridley stepped away from the Falcons for personal reasons.

It’s unclear whether Ridley will be back for the next season, and if he is back on the field, it’s not certain it will be for the Falcons. I’m comfortable drafting Ridley as WR23 in startups because of his healthy upside, but there is plenty of uncertainty surrounding his situation.

Keenan finished as the WR10 in PPR with his third straight season of 100+ receptions. Allen is tied to Herbert, but entering his age-30, it’s hard to have him much higher.

MPJ had a true breakout year two posting a line of 88/1082/6, which was good for WR17. Pittman saw 129 targets but did so with very little target competition. It remains to be seen who Indy will look to add alongside Pittman this off-season, but at the very least, he should be a rock-solid WR2.

It was a down year for Hopkins, who battled injuries for most of the season. He appeared in ten games, going over 80 yards receiving just twice. DHop will be entering his age-30 season in 2022 and may be on the decline.

Moore was on fire before an injury ended his rookie year. He posted a 43/538/5 line in eleven games of his rookie season. I see an elite ceiling for Moore as soon as year two. He is one of the best buys in dynasty.

Johnson broke out in year three, posting his first career 1,000-yard season. That was good enough for WR8 in PPR. Johnson is talented, but he was perfect for QB Big Ben in the short game. With uncertainty at QB in 2022, I worry he won’t be the target hog he has been through his first three seasons.

Something, something BMI. Smith had an impressive rookie season, setting the Eagles rookie receiving record with 916 yards. He showed his excellent separation skills as well his downfield playmaking. Smith dealt with inconsistent QB play all year but showed he belongs. The former Heisman winner can be an elite fantasy option if the Eagles can upgrade at the QB position.

TMC is an elite WR, but I’m worried he might be the new Allen Robinson. Always a QB away. We always bet on talent in dynasty, so I don’t think he should drop outside of the top-15.

Unfortunately, Godwin tore his ACL in week 15, but he was having a great season before that. On top of the injury, Godwin will enter free agency this off-season. With the uncertainty in his situation, he sits outside of my top-12.

Get this man a QB. Please. DJM put up his third straight 1,000-yard season with a mix of Darnold, Cam, and PJ Walker at QB. Moore is still just 24, and with a QB upgrade, a top-five season is in the realm of possibilities.

Diggs followed up his massive 2020 with a solid season in ’21. He finished as the WR7 putting up double-digit TDs (10) for the first time in his career. With Josh Allen under center, Diggs should be a safe WR1 into his 30s.

Adams remains one of the best receivers ever to play the game. He finished as the overall WR2, making it back-to-back top-two finishes at his position. Adams would be higher on this list, but he will be entering free agency and his age-30 season in 2022.

Waddle set the rookie receiver reception record, posting 104 catches. Despite topping 100 catches, he barely reached 1K yards (1,015). Waddle was known for his blazing speed and downfield playmaking ability coming out of Bama but was used differently as a pro. If Miami can unlock his skillset better, he can be a top-five fantasy option at this position.

Kupp had a historic season in 2021, posting a ridiculous 145/1947/16 line in his first year with Matthew Stafford. Kupp will be entering his age-29 season in 2022, but he should be looked at as a top-five WR for the next few years with Stafford.

Is Deebo a WR? Maybe he’s an RB? I’m not sure, but I know he’s good. Samuel put up 77/1405/6 through the air with another 365 yards and eight TDs rushing. Samuel and Shanahan are a match made in Heaven; whether it’s Trey Lance or Jimmy G at QB, it doesn’t matter. Deebo will get his.

The Clemson product showed out in year two, putting up four games of 100+ yards in his last seven games to end the year. Being tied to Burrow for the foreseeable future should make Higgins a staple in the top ten.

Hill took on a different role in 2021. The speedy receiver put up a career-best 111 catches, topping his previous high of 87. I believe you can make a case for Hill as WR1 being tied to Mahomes, but he will be entering his age-28 season, which will make him a harder sell in dynasty leagues.

Dk followed up his breakout year two with a WR14 finish falling short of 1,000 yards. He disappeared down the stretch going over 60 yards just once from weeks 8-18. The down production isn’t all on Metcalf, though.

Russell Wilson was playing with a hurt finger for the majority of the year, which limited his star WR. Metcalf is just 24 and seems like a lock for 1,200+ yards and double-digit TDs with a healthy Wilson.

CeeDee didn’t have quite the breakout many expected in year two, finishing as the PPR WR19, but the talent is there. Lamb is only 22 and tied to Dak Prescott; a big breakout is coming.

Brown was banged up most of the year, missing four games due to injury. When he was healthy, he produced some monster games, going over 130 yards three times in 13 games. AJB remains the alpha in Tennessee and has one of the highest ceilings at the position.

Remember when Chase couldn’t catch in the pre-season? Me either. Chase had an outstanding rookie season finishing as WR5 in PPR. The Burrow to Chase connection should be one of the best for years to come. He has quickly vaulted near the top in dynasty WR rankings.

You can make a case for Chase at this spot, but I don’t think you can go wrong with either player. Jefferson has had the greatest first two seasons for a receiver in NFL history and should be an easy top-five fantasy WR for the next 5-8 seasons.

When drafting in a dynasty startup, it’s crucial to know where to value certain players before the draft. Hopefully, these rankings can help you navigate your draft successfully. Remember to always draft your dynasty league focusing on these three things: age, production, and talent. Thanks for reading!