Over the past few years in fantasy football, we’ve seen several rushing QBs rise to fantasy stardom. Lamar Jackson, Josh Allen, Cam Newton, Kyler Murray, Jalen Hurts, and Taysom Hill has even flashed at times. Ladies and gentlemen, and fantasy football lovers around the world allow @lukesawhook introduce you to the thought that Trey Lance could be a top-five fantasy QB next season. 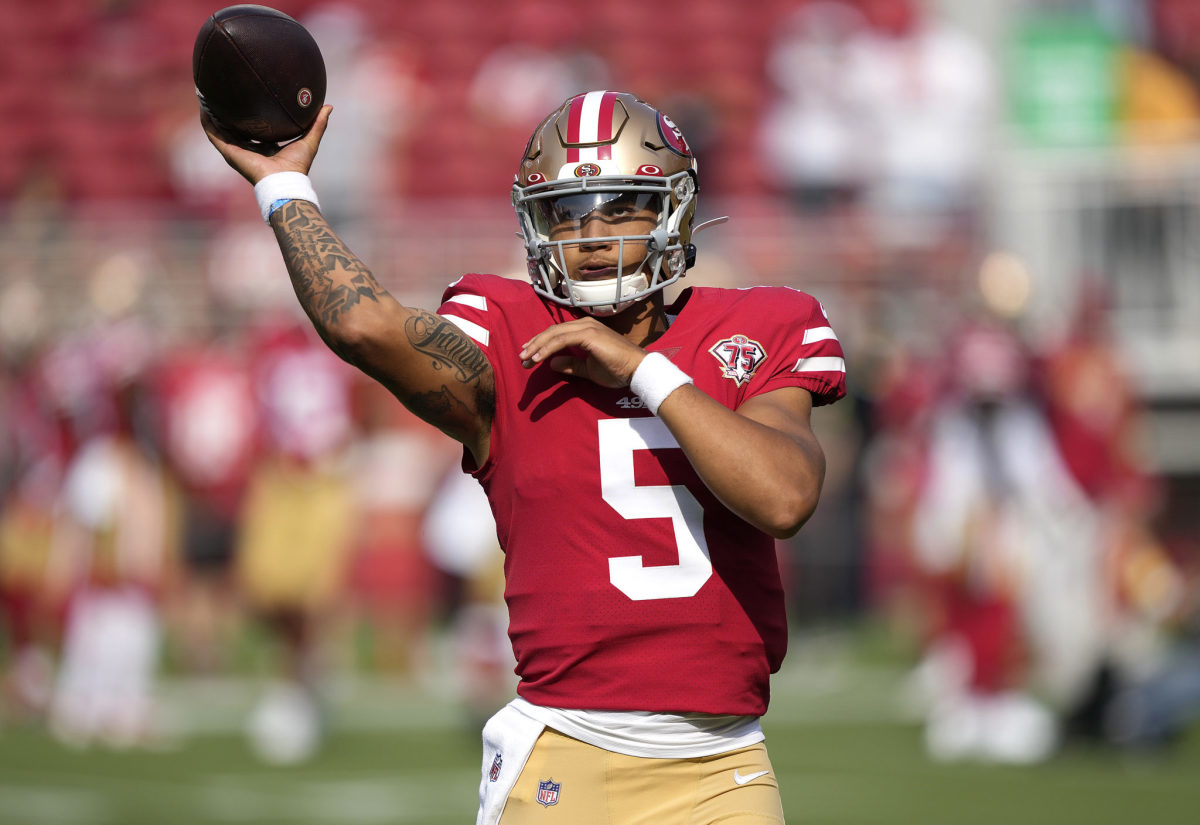 Before we get to Lance and what I believe he’s capable of, let’s look back at previous scrambling QBs, and how the Konami code comes into play. Last season, Jalen Hurts, my 2021 QB “my guy,” finished as the QB7 in fantasy PPG even with a poor situation in Phillidelphia. The argument against Hurts was a simple one for most in the fantasy football community. He isn’t a good QB, he won’t last the full season, and he’ll be replaced. His arm talent is subpar, and he won’t produce at a high enough level to be a good fantasy QB. I and several other fantasy analysts simply said…

The only thing that matters most for fantasy production these days is one question… Do they run the ball? If the answer to that question is yes, they immediately become fantasy relevant. Even some of the worst QBs in the NFL can become fantasy relevant due to running the ball. Taysom Hill is one of the worst QBs in the league in terms of real-life talent. He managed to put up three 17+ fantasy point games in four games when he played for the Saints. Hill even scored back-to-back 24-point games, which is elite-level fantasy QB play.

Why is Trey Lance Different

The argument for Lance is quite simple now that you know just how easy it is for below-average real-life QBs such as Jalen Hurts and Taysom Hill. He is a QB in a MUCH better situation than Hill and Hurts as far as being surrounded by weapons, better coaching, and overall just better talent to support him. Mix that with top-tier talent as a player with elite-level arm strength and scrambling abilities, and Lance is my top breakout selection for 2022.

From the current 2022 redraft fantasy football ADP, he’s going as the QB13 off the board. As I just mentioned, Hurts was the QB7 in PPG in a much worse situation while being less talented. Lance’s draft cost is as close to a sure thing as it gets for me. He gives fantasy managers an extremely high floor and a top-five weekly ceiling. In his 2.5 games started last season, Lance posted 20 fantasy points in just half a game against the Seahawks, 20 points against the Texans, and 15 points against the Cardinals. If you were to extrapolate this three-game sample across an entire season of averaging 20 fantasy PPG that alone puts him as the QB10 in fantasy PPG last season.

Given an entire off-season to improve, adjust the scheme and develop as a more “raw” prospect coming out of college at NDSU, I fully expect Lance to take a leap in terms of his talent on the field. The argument for Lance is simple. I’m all in, a young, incredibly talented QB surrounded by elite weapons such as Deebo Samuel and George Kittle. Plus, he’s coached by Kyle Shanahan, who runs the football at the level of Josh Allen/Jalen Hurts. Lance indeed possesses top-five fantasy upside and is currently going outside the top 12 fantasy QBs, with arguably one of the highest floors of any fantasy QB. With his current ADP of QB 13, I’ll be drafting up Trey Lance in the eighth round in every single redraft league I can next season.

Antonio Gibson: Should I Trade or Should I Hold?
Can Rashod Bateman become a top-20 WR?
Training Camp Sale!