A former four-star recruit, is Jeremy Ruckert destined to be a “better in the NFL than college” player? Is he worth a late-round rookie pick? 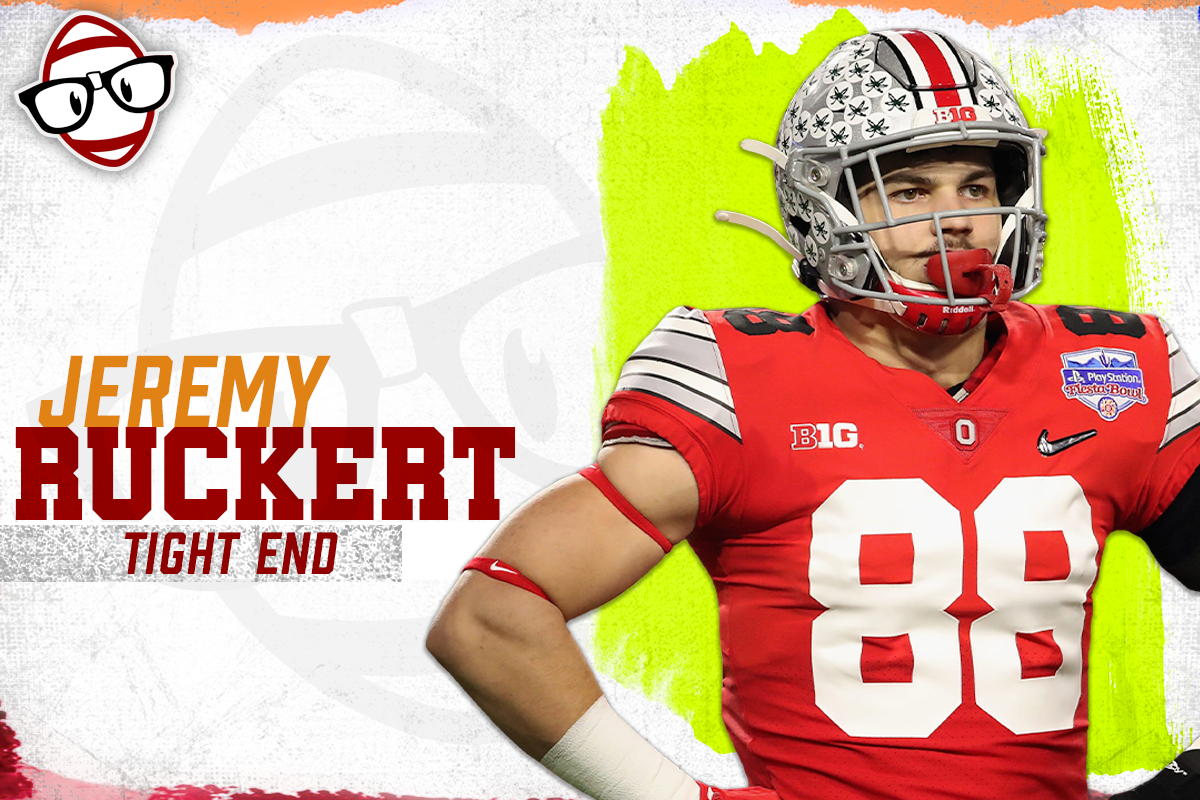 Jeremy Ruckert is a former four-star recruit hailing from Long Island, New York. As the number two tight end in his recruiting class, he led his high school to their first Long Island Class 1 title. Ruckert was an All-USA Today first-teamer who ranked in the top 40 of both ESPN and 247’s composite rankings. He capped his high school career off with a Gatorade’s New York Player of the Year.

Ruckert turned down scholarship offers from prominent schools like Georgia, Alabama, and Notre Dame. Instead, he continued his football career in Columbus with Ohio State. He never put up eye-popping stats in his four-year career there, but he was unquestionably one of the leaders on the team. The persistent presence of top wide receiver talents like Chris Olave and Garrett Wilson meant Ruckert was never more than a secondary piece of the offense in his role. However, Ruckert had a nose for the end zone. Impressively, twelve of his 54 career catches went for touchdowns.

One of his most memorable collegiate games was the Buckeye’s 2020 Playoff win against Clemson, where he caught two second-quarter touchdowns. He finished his college career with a win over Utah in this year’s Rose Bowl, catching three passes for 25 yards in a game you may remember only for Jaxon Smith-Njigba’s record-setting performance.

Ruckert did not participate in the 2022 NFL Combine due to a foot injury he sustained during Senior Bowl week. Unfortunately, it appears as though he will not participate in Ohio State’s upcoming Pro Day, either. However, Ruckert was earning high praise from those involved at the Senior Bowl before his injury –

“TE coach Ron Middleton, who is serving as the head coach this week in Mobile, told reporters Wednesday that Ruckert made plays when targeted in college. He added: “I don’t know the extent of his route tree he ran, but he had no issue catching the ball when it was thrown to him and did not pass up a chance to knock the hell out of somebody. [Ruckert] likes contact, and once he gets the ball in his hands, he still likes contact, and he moves well. He has a burst after the catch, so a lot of positives about that kid.” – Eric Allen, NewYorkJets.com.

If you check the All-22 tape on Ruckert from our film room, you will see him consistently get open down the field. That is the good news. Ruckert, like the best TEs often do, seems to find holes down the field. As shown in the clip above, Ruckert leaks out to the right, drawing coverage. He jukes, cuts back to the post, and gets the ball, turning the reception into a touchdown.

The bad news? Despite getting open on numerous occasions, he often was not targeted. Instead, the quarterback would find an equally open Olave, Wilson, or Smith-Njigba. And why wouldn’t he? They are dynamic playmakers. What a problem for an offense to have that level and depth of talent!

On plays seemingly designed for him, Ruckert would shine. Again, the above clip from the Penn State game showcases what Ruckert can do with smooth, definitive route running. He found a hole in the coverage and made the completion on a critical drive-extending play.

While Ruckert will never be mistaken for a burner, he has enough straight-line speed to create mismatches on intermediate routes up the seam. His strides are not fluid, but there aren’t many graceful 6’5″ 250lb athletes.

This clip showing one of his two touchdowns against Clemson in the College Football playoffs is one of my favorite. Ruckert dominated that quarter, going 3-55-2 against the Tigers. Fitting because, remember, nearly 25% of his career receptions at Ohio State were touchdowns.

I believe this play really demonstrates the potential of Ruckert when given the opportunity. And that is the biggest question with Jeremy Ruckert – is he more than the 54 total receptions over four years? Or, instead, with an expanded role in the NFL, is the best yet to come? With his size and route running, Ruckert will at least be a great red zone threat for whichever NFL team drafts him. Unfortunately, to be fantasy relevant, he must become more than just a player with a few 2-19-1 stat lines sprinkled throughout the season.

This surprised me because much of what you read about Ruckert is that he is an excellent blocker. He is, but I’d add a caveat of “at the point of attack.” When Ruckert would be on the line of scrimmage, he would square up and block the defender in front of him quite well. In those small boxes, he routinely found himself on the winning side of the battle.

However, I often saw Ruckert glance off of a blocking assignment given space down the field. I was hoping to see Ruckert dominate and pop smaller linebackers, corners, and safeties with a player of his size and a head of steam. Imagine my disappointment when it would often lead to a defender simply sidestepping out of the way.

One of the biggest concerns we hear about tight ends in dynasty is how long they take to develop. I would echo those words when it comes to Ruckert. I do not believe he is ready to step into an NFL offense on day one and start or take many snaps. Don’t get me wrong. That isn’t necessarily a bad thing. The talent and pedigree are there, but he is definitely not a transcendent athlete or NFL-ready prospect.

In summary, Ruckert projects as the 89th pick in the 2022 NFL Draft according to NFLMockDraftDatabase.com. As the fourth tight end selected, that gives Ruckert roughly third-round draft capital. If we are looking for a late-round tight end target, the third round is the latest I like to shoot for. After all, the third round has given us Travis Kelce and Jimmy Graham. Similarly, the third round has produced Mark Andrews, Austin Hooper, and Dawson Knox more recently.

If Ruckert truly does get drafted late on the second day of the NFL draft, I believe he is worth a late-round rookie pick. I do not believe he has the ceiling of someone like Travis Kelce or even a player like Dallas Goedert, but he could live most of his career in the backend of the top twelve tight ends. If Ruckert is drafted on day three, or if he is drafted to a team with another established tight end, I would likely pass in most league formats. Your waiver wire is likely filled with TEs that could put up similar TE2-type numbers. In TE premium leagues or leagues where you start two tight ends, he is definitely worth a late add due to his pedigree and potential.