Najee Harris had a phenomenal rookie season. However, should he be considered a sell high? @noahrwright breaks down his thoughts on Najee’s value moving forward. 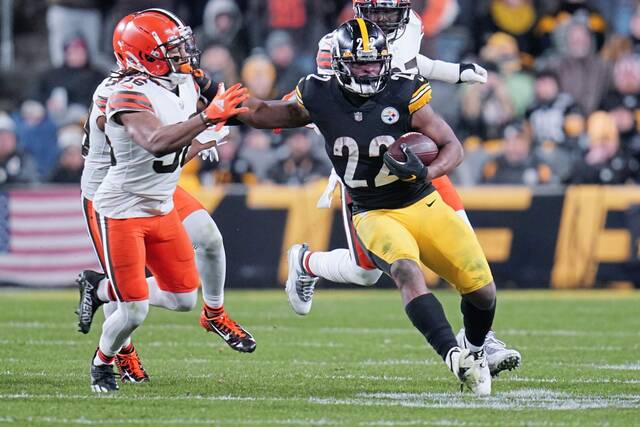 What a year 2021 was for Najee Harris. Finishing at RB3 in PPR formats with 300.7 total fantasy points, Harris joins a unique group of backs. In the last 10 years, only two other backs have finished top 3 overall in PPR as a rookie: Saquon Barkley (2018) and Ezekiel Elliot (2016). Not a bad start to the 24-year-old’s career. There’s no way around it. The dude balled OUT. However, can he sustain this success moving into a year with a new QB? Let’s find out…

Ben Roethlisberger had an outstanding career, and I respect his loyalty to the Steelers, but his arm strength over the last few years has been pretty abysmal. One of the best stats to look at when figuring out the average depth of a quarterback’s throws is average air yards per attempt. This breaks down the average yardage of a QB’s passing attempts while also keeping in mind touchdowns and interceptions. Looking at this past season, Big Ben was 34th in average air yards per attempt in the league. While some of that may be scheme-dependent (Patrick Mahomes ranked 26th, but he also HAD Tyreek Hill…), it seemed clear that Roethlisberger was not going to be throwing bombs down the field anytime soon. This certainly was not helpful for Chase Claypool or Diontae Johnson, whose fantasy owners will enjoy change at quarterback.

So, who would be the biggest beneficiary of a plethora of short throws? Perhaps a rookie running back out of Alabama who had 43 receptions for 425 yards on a national championship team in his senior season. There is no doubt that Najee enjoyed noodle-arm Ben throwing check downs to him all season. He showed how much he loved the young stud by targeting him 19, yes NINETEEN, times against Cincinnati early in the season. Unfortunately for Harris, there’s a new sheriff in town. For this analysis, we will use who is at quarterback right now in Pittsburgh as they could draft one next month. Welcome the former NVP, Mitchell Trubisky.

In his time in Chicago, Trubisky wasn’t notorious for targeting his running backs quite like Big Ben. Looking at his time as a starter from 2017-2020, the Bears’ running backs combined for 76, 91, 104, and 81 receptions. Of course, some of this could have to do with John Fox and Matt Nagy’s use of the running backs and the personnel on the field, but I suspect more so that Mitch had a better ability to throw down the field than Big Ben did this past year (not saying much).

During his 2018 campaign, Trubisky was #5 in air yards per attempt in NFL, which is far better than Big Ben this past year. The two players that had the most receptions that year on the Bears? Tarik Cohen and Taylor Gabriel. Of course, we cannot forget Allen Robinson, but that’s not exactly a room full of receiving talent. Combine Trubisky’s possible upside we saw in 2018 with weapons such as Diontae Johnson, Chase Claypool, Pat Freiermuth, and Najee could be looking at a significant reduction in receptions this upcoming year.

If Najee had a hole in his game, it would be the inefficiency with his carries. He finished 59th in the NFL in true yards per carry at 3.8 on the second-most carries with 307. This would have been a much larger issue if he did not see the astounding number of targets from aging Ben.

Now, it is important to look at other factors to ensure we see the entire story. According to PFF, the Pittsburgh Steelers offensive line received a grade of 26th in the league. This included now third-string center and former Fighting Illini Kendrick Green in the starting lineup, who touted a PFF grade of 53.1. For reference, that would rank him at 146th/160 graded offensive lineman (this hurts to say as an Illinois fan). Clearly, they had some problems that needed to be addressed this offseason.

So far, they’ve been able to sign both Mason Cole and James Daniels, who received grades of 69.7 and 71.0, respectively, from PFF. While neither of these signings is a blockbuster move, the upgrades at line should be beneficial for a new QB and star RB in Najee Harris.

Now don’t get me wrong, Najee Harris is a spectacular back and should be coveted in dynasty leagues. As I explained earlier, his rookie year was something special, and people should respect that. BUT, I do not think his value could be any higher than it is right now. He’s perceived to be in the RB1-3 range, but I would be bet that he does not attain those levels of success over the next few years. While his offensive line was far below average, it is worth noting that he ranked 29th amongst running backs in average defenders in the box. Essentially, teams were forcing Big Ben to throw, allowing Najee to have a fairly solid YPC. However, he did not.

To get a better idea of what I believe would be a good return for his perceived value right now, here are some trades that I would do if I were sending Najee Harris. Using the DynastyGM trade calculator is VERY helpful to figure out trade options. If you want to become a DynastyGM member, use code Noah22 for 15% off!