With several WRs available in this year’s draft from smaller programs, @timbmartens digs in to find out if success rate is better or worse for prospects from non-power-5 schools. 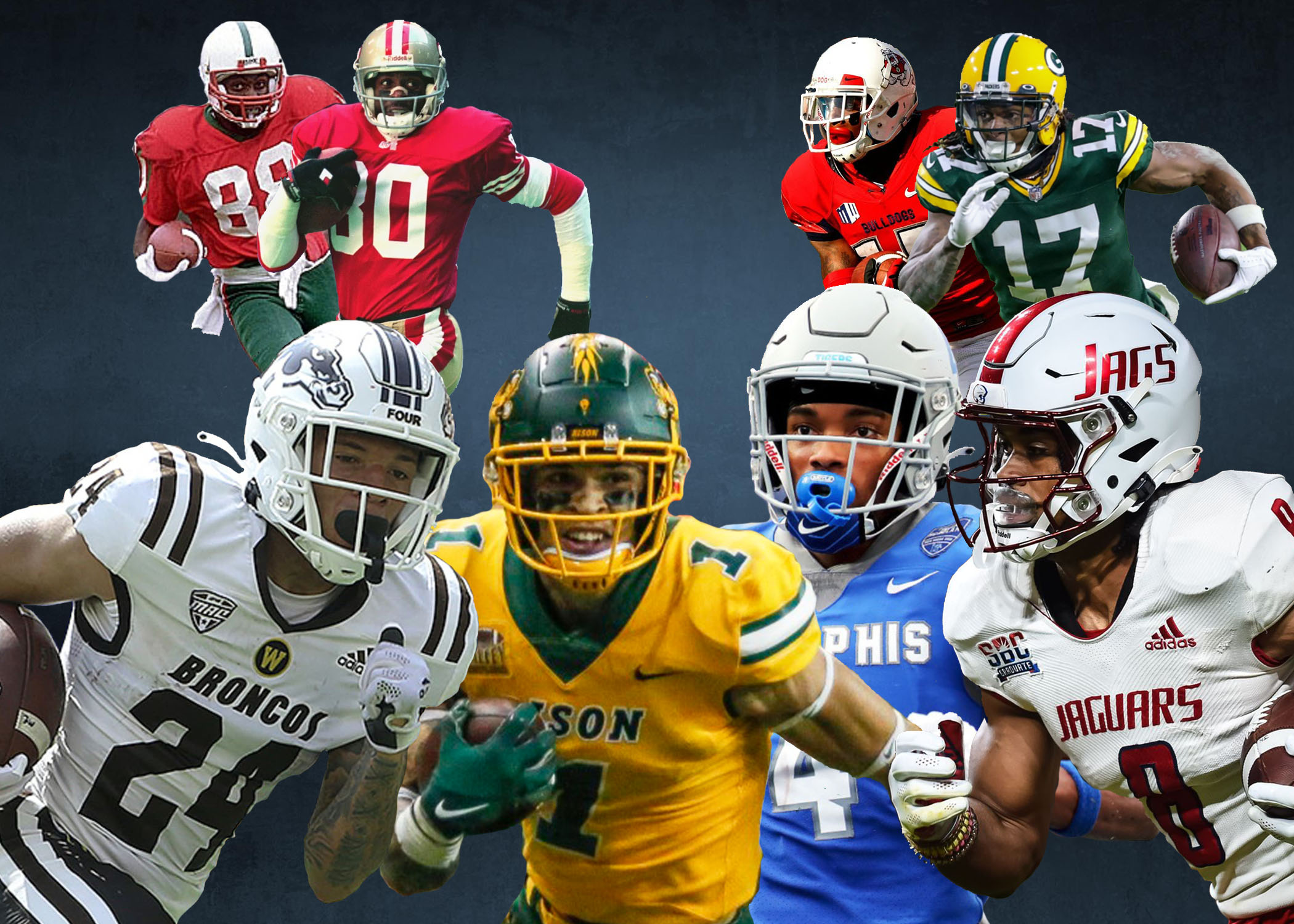 The 2022 rookie WR class has shaped into being a very interesting one. While the QBs, RBs, and TEs available in this draft lack depth after the first few players, the WRs are plentiful. Additionally, everyone seems to have a different favorite, and separations in tiers are all over the place.

The names at the top tend to be somewhat consistent. Treylon Burks, Garrett Wilson, and Drake London are all making a case as the top guy. However, the next tier is a mix of many names like Jameson Williams, Chris Olave, George Pickens, and Jahan Dotson.

Two other receivers that have found their way into the second-tier talk are from non-Power 5 schools: Christian Watson and Skyy Moore.

With both of these receivers being discussed as possibilities in the late first or early second round of rookie drafts, I thought it would be good to look into their profiles and the history of WRs from non-Power 5 schools in the draft.

Watson is a 6’4″ 208 lb. wide receiver out of North Dakota St. Watson was a two-star recruit coming out of high school and found his way to the Bison in the FCS for his collegiate career. But if you end up in the FCS, a perennial powerhouse is a good place to go.

Watson had 801 yards and 7 TDs in his 12 games during his senior season, but the excitement around Watson really took off when he dominated during Senior Bowl week. This hype only got bigger when scouts watched a 6’4″ wide receiver that weighs over 200 lbs clock a 4.36 40-yard dash at the combine.

His speed scores and athletic ability are tremendous and stand out when watching his tape, as noted in Andrew Harbaugh’s Rookie Profile on Watson.

“He plays with his speed, though, is impressive by itself, but when you see him do it in a game and how it allows him to have three to five yards of separation from defensive backs. I can’t recall seeing someone with speed to pull away from guys on runs like that since Mike Wallace. Wallace was shorter than Watson, so speed paired with his height leads us to the next strength.”

As Harbaugh also mentions, landing spot could play a big factor for Watson in this draft. But if he finds himself on an ideal team for his skill sets, he could be producing very good numbers at the pro level. But the question remains if he can handle the competition of the NFL coming from the FCS.

Moore is a 5’10” 191 lb. wide receiver out of Western Michigan. Moore was a three-star recruit out of Pittsburgh, PA, that converted from QB/CB to WR when he stepped onto the campus at Kalamazoo.

In Moore’s final collegiate season as a junior, he tallied 1,292 yards and 10 TDs in 12 games for the Broncos. While he is a bit undersized, Moore plays with toughness and has a knack for positioning himself in the best place to make him an available target for his QB. He clocked in at 4.41 seconds on his official 40-yard dash.

In my rookie profile on Moore, I mentioned that I think Moore is the best slot receiver prospect in this class. He is good at leveraging his position on the field and using his route running to gain advantages. If he is drafted by a team that has a good WR1 already rostered and a competent QB, he could succeed right away in the NFL.

So we understand who Watson and Moore are as players, but can history tell us anything about small-school wide receiver’s success? To find out, I pulled data on WRs drafted from 2013 to 2021.

After Adams, the round one and two ADP receivers list is a bit less exciting: Corey Davis, Courtland Sutton, and Breshad Perriman are the three other round one receivers. The highlights of round two are Kenny Golladay and Michael Gallup.

We are lifted back up again in round three by Cooper Kupp and Diontae Johnson, but the other ten receivers have never finished in the top-36. Finally, round four offers us a couple of semi-successes in John Brown and Darnell Mooney.

And of course, if we want to go back further, we could include names like Jerry Rice, Randy Moss, Terrell Owens, Isaac Bruce, Antonio Brown, Torry Holt, Andre Reed, Rod Smith, Brandon Marshall, and Donald Driver to the list of successful small-school WRs.

While these numbers may not be all that reassuring on their own, they look a little better when comparing them to Power 5 WRs. What you have to remember is that even Power-5 school WRs don’t hit at an insanely high rate.

These odds are not far off in the non-Power 5 school WRs. Receivers have had at least one WR1 season 12% of the time, a WR2 season 24% of the time, and a WR3 season 29% of the time. With a smaller sample size to work with, it would only take one of Watson or Moore to be successful for the non-Power 5 WRs actually to look like a safer bet. The numbers are that similar.

With this in mind, I would say that knocking Watson or Moore for where they went to school and how good their competition was would be a mistake for any owner.

In fact, you can extend this to several other WRs in this draft. Jalen Tolbert comes from South Alabama and looks like he may be a round two or three rookie pick. Khalil Shakir is a late second/early third round prospect from Boise St., and Calvin Austin III from Memphis will likely have his name called in rookie drafts in the late third round.

We may look back on 2022 as the year when two or three great fantasy contributors from non-Power 5 schools were drafted and shifted the percentages in their favor.