Bijan Robinson is getting a lot of hype to be pick 1.01 in every format. @timbmartens is making the case that you should still be going QB at the top of Superflex drafts. 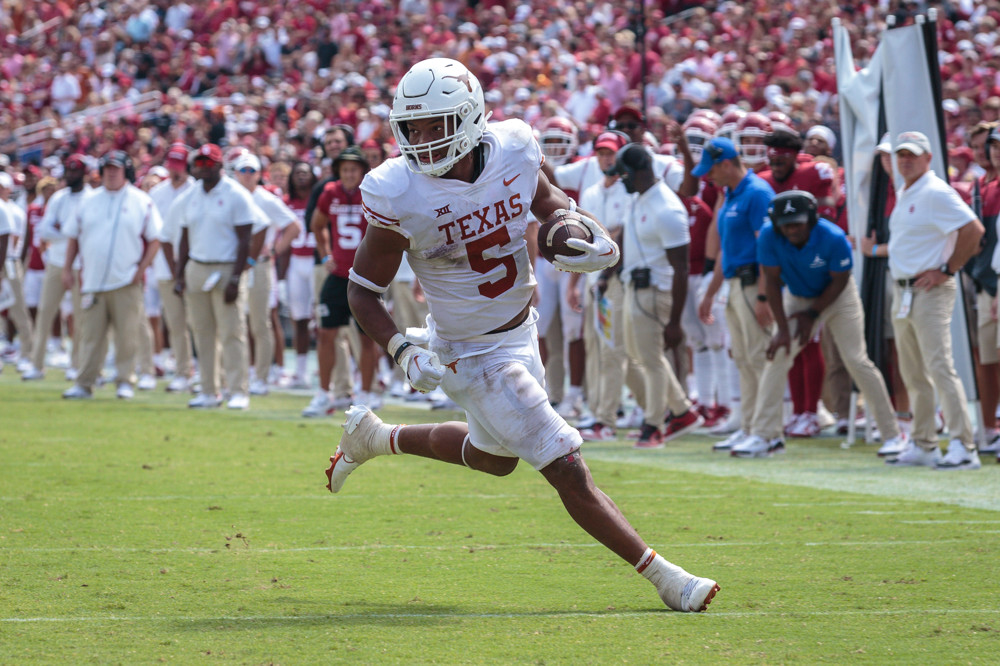 The top running back by miles. A generational talent. The best draft prospect in half a decade.

Many things have been said about Bijan Robinson since he stepped foot onto campus in Austin a little over two years ago. The dynasty community, specifically devy leagues, have talked about the running back non-stop. He is considered the best draft prospect since Saquon Barkley entered the league in 2018.

And I am here to tell you I am not taking him at the 1.01 in Superflex leagues.

Let’s look back at the top options in previous rookie classes, and I will give my reasoning for passing on Bijan at the top spot. Maybe I’ll convince you to do the same. Or perhaps you’ll be convinced my process is entirely wrong. Either way, if you’re at the 1.01 or 1.02, this is a practice you should at least be considering for yourself.

Bijan Robinson is undoubtedly a marvel to watch play football. His combination of size, speed, vision, and explosiveness do not come around often. As fellow Nerd writer said in his pick description for the Dynasty Nerds Superflex Rookie Mock Draft 2.0:

“He is truly a generational talent and will immediately lock in as a top-five dynasty running back the second his name is called in Kansas City in April.”  – Dan Toomey

I’m not here to argue any of this. I do believe Robinson will be a great pro. I think he is set to be a top-five dynasty running back once he steps into an NFL locker room. He will likely be a bell cow wherever he ends up and can be a huge leg-up for any fantasy owner.

But let’s briefly discuss the last sure-thing, generational talent. Saquon Barkley. Touted, like Robinson, as the best prospect in years, Barkley broke into the league with a bang. 2,028 yards from scrimmage and 15 total touchdowns had Barkley finish as RB2 in 0.5-PPR leagues, behind only Todd Gurley. He was one of only four backs to eclipse 300 fantasy points in 2018, and there have only been six such seasons from a running back in the 2019, 2020, and 2021 seasons.

But things changed a bit in the three seasons after Barkley’s rookie campaign. Due to injury, Barkley missed 20 games over the next three years and finished as RB10, RB120, and RB32 in his second, third, and fourth years in the NFL. In 2022, Barkley has stayed healthy and is currently RB5. But it has been a rocky road for the generationally talented back.

Let’s also talk about the other guys before Barkley that had been labeled “generational talents”; the previously mentioned Gurley and Leonard Fournette.

Entering the league in 2015, Gurley was a consensus top pick in rookie drafts. In his first two years in the league, Gurley finished as a respectable RB7 and RB17 in 0.5-PPR. But then the 2017 and 2018 seasons came when Gurley was back-to-back RB1, averaging just over 3 points more per week than the second-best back in those seasons.

Both Barkley and Gurley lived up to their talent, and Fournette gave owners some top-10 seasons. None of these three were busts; they all had seasons that brought in immense amounts of points for owners. So why am I arguing against going with the next generational guy at 1.01 in 2023?

Drafting at the 1.01, your hope will always be that you can find a guy that ends up being top 5 at their position. If you have the 1.01, it is likely your own pick, and you have a team in major need of a roster boost. Finding a premier player like this is a necessity.

Being that Superflex leagues even the playing field and make quarterback much more valuable than 1QB, the quarterback position has a limit to how many players are going to help your roster. Only 32 quarterbacks are starting NFL games, where most teams run two running backs every week. This, obviously, limits the number of players that can have any impact on your weekly roster.

These numbers may be smaller, but those points add up over time. Couple this with fewer quarterbacks, and the advantage is significant.

Of course, there is another significant difference in these positions. How often the player is on the field matters. Undoubtedly, a running back is much more susceptible to an injury than a quarterback.

In Dynasty Nerds current Superflex rankings, Patrick Mahomes, Josh Allen, Lamar Jackson, Justin Herbert, and Kyler Murray are the top-5 quarterbacks to own in dynasty. Between all five of them, they have missed just 16 games since being declared the full-time starter for their team. They have played a combined 94.7% of their games.

Meanwhile, the top-5 running backs are Jonathan Taylor, Christian McCaffery, Saquon Barkley, D’Andre Swift, and Dalvin Cook. These backs have missed 69 games combined since becoming starters. That means they have only played in 77% of the possible games.

And this isn’t just durability within the season. This is career durability and longevity. Patrick Mahomes is currently in his fifth season as a full-time starter and is considered in his prime. Aaron Rodgers won the NFL MVP the last two seasons at 36 and 37 years old. Tom Brady was the third-highest-scoring quarterback a season ago at age 44. Brady has been a top-12 quarterback 15 times in his career. Rodgers has been a top-12 quarterback all 12 seasons where he played ten games or more, including being top-2 8 of those seasons.

Meanwhile, the best running backs we have seen recently have a window of around five years to produce at an elite level. Todd Gurley had two elite seasons out of a six-year career. Le’Veon Bell was only in the top 12 three times in his eight-season career. Alvin Kamara’s stats are starting to slip in season six. LeSean McCoy found a way to play 12 seasons as an NFL running back but was only top-12 five times. Ezekiel Elliott is in year seven, and everyone is trying to trade him for whatever they can.

All of this is to state something that everyone knows to be true: running backs have a very short shelf-life. Quarterbacks have the longest careers. If you get a chance to own a player that can contribute at a high level for 10-12 years, it feels crazy not to take that chance.

Of course, there is the other side of things that favors Bijan quite a bit. Hit rate.

There aren’t a lot of names in that list that are true busts.

There are plenty of busts in that list. But also some of the best assets in Superflex leagues that you can own. In fact, seven of the top ten players in the Dynasty Nerds Superflex rankings are quarterbacks from that list. Only one running back (Jonathan Taylor) is in that top 10.

With all of this laid out, I can understand the compulsion for many owners to look at the two lists of running backs and quarterbacks and think that they would rather go with the player with a better chance of success. The running back hit rate is undeniably higher than quarterback.

However, when you hit on a quarterback, it changes your franchise for a decade or more. An elite quarterback gives a more significant competitive edge that lasts for more years than a running back could dream of offering. And with a limited number of quarterbacks that play at this level, having an elite one is an enormous boost.

In the last few seasons, we have seen players like Drew Brees, Ben Roethlisberger, Philip Rivers, and Andrew Luck retire. Cam Newton is as good as retired, and Matt Ryan isn’t far behind. Many elite quarterbacks that were around for many years have left the game. The list of quarterbacks to build a franchise around is not that long. And when you have one of these players, you aren’t likely to want to trade them without getting a serious haul in return.

And let’s face it: if you are drafting at the 1.01, your team is likely not just a running back away from being relevant. You need a franchise-altering piece. You need a cornerstone that will last the next ten years. This is all predicated on the 1.01 being your pick, of course. If you fell into trading for the 1.01 from another team and already are set at quarterback, Bijan makes a lot of sense.

While I know the risk is higher, and the hit rate is lower, I am drafting Bryce Young and C.J. Stroud before Bijan Robinson this season. Ask anyone who owns Saquon Barkley and drafted him at 1.01 in 2018: would you rather have Barkley or Josh Allen/Lamar Jackson? Yes, you have to get the quarterback pick right, and he has to become a star. But the reward outshines the risk for me.

What do you think? Is passing on Bijan for the chance at a franchise quarterback foolish? Or is it the best way to rebuild a lowly dynasty team that has found itself holding the 1.01 in 2023?