@_JasonStein introduces a new way to look at value in Fantasy Football – the P/E ratio. Fantasy players should be valued based on the relationship between a player’s price and his earnings. 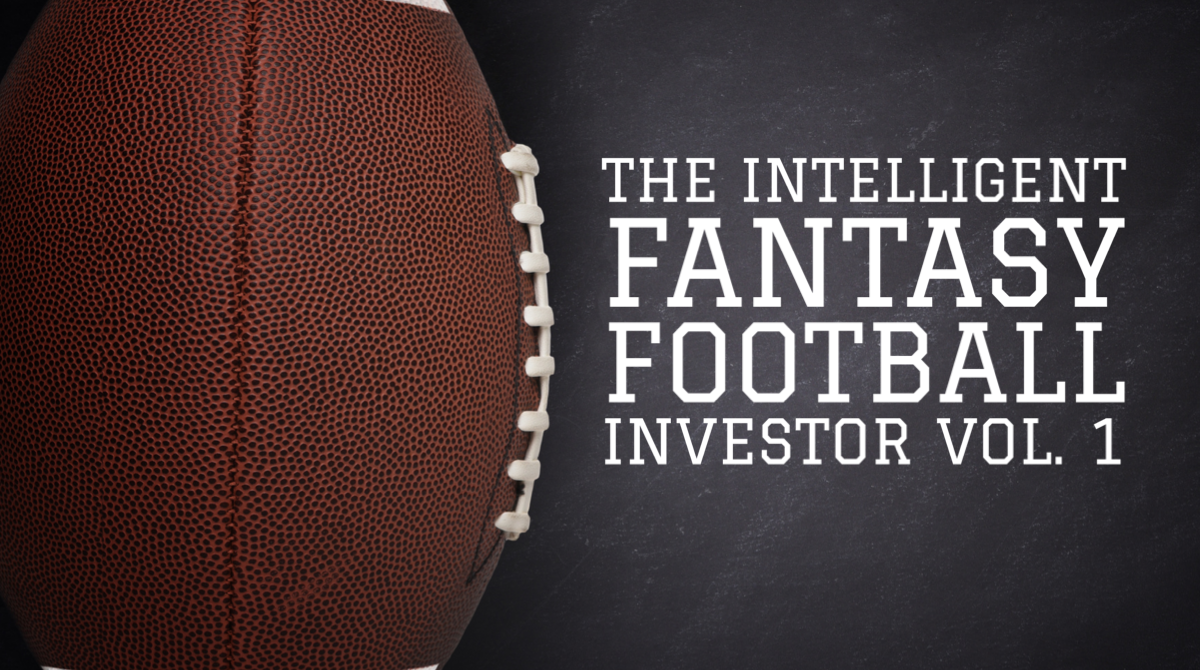 I love fantasy football. When I’m not working, hanging out with family, or watching that next hit TV series, I’m usually thinking about football. There is so much to it; it’s competitive, dramatic, strategic, complicated, fun, among many, many other things to me. And I have a tremendous passion for it.

I also have a passion for investing. And let me tell you, there are so many similarities. From someone that makes a living investing in the stock market, I’ve come to learn that it’s impossible to be right all the time. In fact, I’m wrong a lot. I’m honestly just trying to be right slightly more than I’m wrong. Usually, that results in pretty great performance vs. the average investor.

In other words, price ≠ value. This is the most important piece that most people don’t get right; price and value are not the same things. Price is what you have to pay to get a fantasy player. Value is what a player is fundamentally worth. In the stock market, there are many ways to come up with a stock’s fundamental value. Let’s say you come up with a fundamental value of $10 for a company. Then you go to the market and see that that company’s stock is trading for $7. You would say that this company is currently trading at less than what you think it should fundamentally trade for, or it’s undervalued. In this case, the price is $7, but the value of the stock is $10. If you put the idea to work, you would make a profit of $3.

One of the more common measures of value on the stock market is the price to earnings (P/E) ratio. For this valuation metric, you take a company’s price per share and divide that by its earnings per share (EPS) to come up with its P/E ratio.

So in fantasy football, one way to look at price is the number assigned to him on keeptradecut.com (KTC), a common dynasty trade calculator. Notice I didn’t say value here; I’m saying KTC = Price. Currently, Patrick Mahomes KTC is the highest with a price of 9997. KTC is not stationary. It moves around based on new information, just like stock prices do. So KTC, in a sense, is just a snapshot at one moment in time. Once new information comes out on a player, analysts will study the latest info and determine how that changes a player’s KTC. Then his price will move up or down depending on if the new information is good or bad for the player.

Now to put it all together. First, you have KTC- that’s your price per share, our numerator. Next, you calculate the denominator, a fantasy player’s earnings or fantasy points on a per-game basis. Divide the numerator by the denominator, and you get a player’s P/E ratio.

I have an example for you, so let me lay out the groundwork. So for the numerator, I used the price assigned to each player on keeptradecut.com on 2/4/22. Remember, KTC is always moving around, so that’s why I include the date of when I grabbed the numbers. Next, I used each player’s actual PPG for the 2021 season for the denominator. Finally, take each player’s price (KTC) and divide that by their earnings (PPG) to come up with each player’s P/E ratio. For the sake of simplicity, I take this P/E ratio and divide it by 10 to make the numbers more usable. For example: Patrick Mahomes P/E = 9997[KTC] / 21[PPG] / 10 = ~47x.

Results for the top 25 players sorted by KTC:

How to use it?

So a little explanation on how to apply P/E ratios. So a low P/E in and of itself does not make a player a good investment. When comparing similar assets (like for like), the lower the P/E, the more value you get from that player. In the chart above, there is more value in Justin Jefferson (44x P/E) compared to Ja’Marr Chase (51x P/E). I am not saying Jefferson is better than Chase, just that you are getting more PPG given each players’ KTC.

So given that Chase and Jefferson are similar assets and Jefferson is trading cheaper than Chase, let’s come up with an actionable trade: Chase = Jefferson + 2022 Early 2nd. This example trade works out pretty even on the keeptradecut.com dynasty trade calculator. And you are picking up an extra Early 2nd, which is a great way to create some value.

Another point of emphasis, just because a player is objectively a good player doesn’t mean he’s a good investment. Again, a good investment is where the fundamental value of a player is greater than his current price. Good players can become too expensive. Average players can become too cheap. Then it becomes prudent to take the asset and create some value by trading him at his current price.

The P/E ratio is useful only from a relative perspective, how it compares to others’ P/E ratios. Thus there is some subjectivity to how it is used. The relative analysis does well when comparing like assets. However, it provides little help in comparing players from different positions. The true value from this analysis would be looking within each position group for value amongst the position.

How do you differ from consensus?

Around mid-summer, we will roll the P/E ratio forward and move from actual 2021 PPG to projected 2022 PPG, which will help you even more as we embark on the 2022 fantasy football season. If you truly want to make profits using this method, you have to know consensus. Then most importantly, see where you differ from the consensus. Where is consensus wrong? This happens all the time in the stock market. When thoroughly analyzing a company, one can conclude that consensus has a company’s earnings wrong (too high/low). Then you can use that information to make better decisions.

You can evaluate a player’s PPG in a similar fashion, i.e., are consensus projections of PPG right, or do you know something consensus doesn’t know? Let’s say you do a ton of work on a particular player, and you think that consensus PPG is just flat out wrong. It’s way too low because of your unique insights on his new head coach, his new teammates, his injury rehab, etc. If you are correct, then you would have to adjust that players’ PPG upward, higher than consensus is currently estimating, which would, in turn, lower that player’s P/E, everything else equal. Then your P/E for that player is different from the consensus P/E, which should help you create some profits. We will dive into this further in future volumes.

I decided to write this because analyst ‘Joe Schmoe’ said his favorite guy was an extreme value but didn’t talk about what value meant. I think Joe’s statement was more of a comment about price than it was about value. Without the discussion of fantasy points or earnings, you are missing half the point of what value is. The P/E ratio puts a number to value, and once you have value represented as a number, you can do all sorts of things with it.

With this level of insight into value and a new way of looking at things, fantasy managers will be able to make the best possible decisions regarding price and value, allowing them to have superior fantasy results. Stay tuned. There is much more to come. Next in this series, we will look at each position group (QB, RB, WR, TE) and discuss actionable ideas (Buy, Hold, Sell) and trade examples for you to put to work. First up will be the WR group.

I’m looking forward to slicing up the position and giving you guys some real actionable advice to help you win your dynasty fantasy football leagues.

That’s it for now. Please follow along on Twitter @_JasonStein and let me know what questions you have and how I can help. Use promo code “INVESTOR” for 15% off any Dynasty Nerds membership.