Applying valuation to WRs using P/E and Clusters. And a new way to give fantasy football buy/sell recommendations. 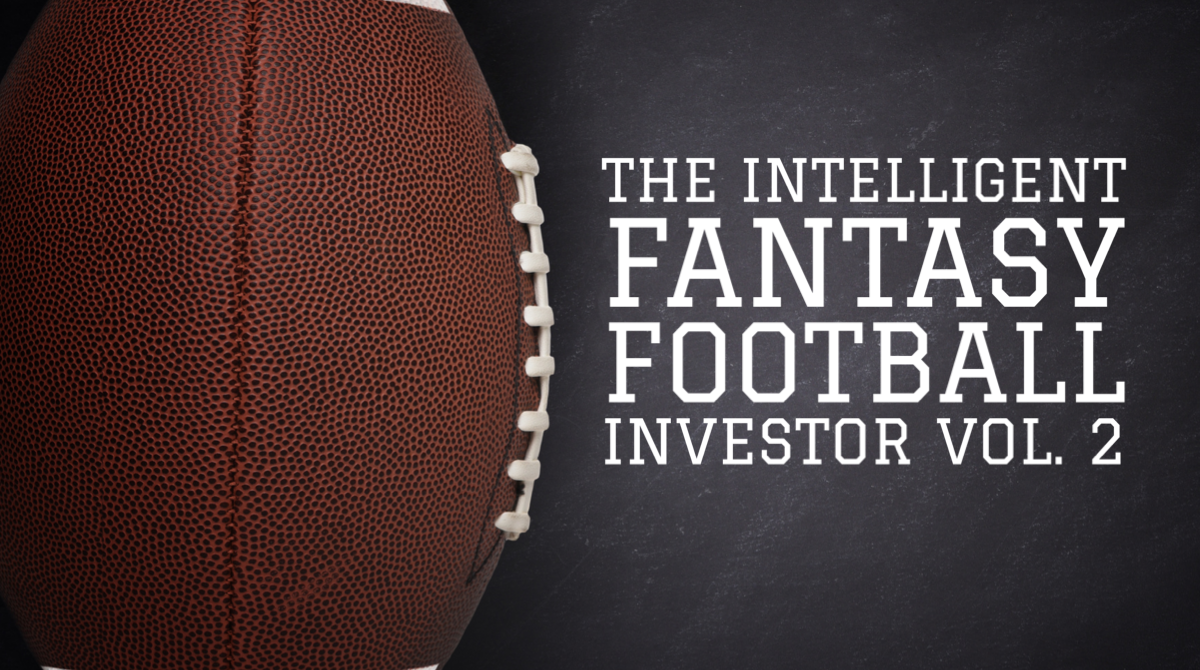 First off, thank you so much for reading The Intelligent Fantasy Football Investor Vol. 1. The feedback and interactions have been truly amazing! If you haven’t read Vol. 1 yet, please stop now and read it on Dynasty Nerds. Then come back, because if you liked Vol. 1, I know you will like Vol. 2. This comment from Colin Decker at Campus2Canton made my day, and it’s exactly what I’m trying to accomplish. Let’s think differently.

In fantasy football, I proposed one way to look at price is the number assigned to him on KeepTradeCut(KTC). KTC = Price. Fantasy points on a per-game basis (PPG) are a player’s earnings. Now, to put it all together: P/E = KTC / PPG (note: divided by 10 for simplicity). When comparing similar assets (like for like), the lower the P/E, the more value you get from that player. The best way to use P/E is to look w/in each position group for value.

Now I’m going to pull a little from my experience as an investor in the stock market. The most common way to look at the P/E of a company is to compare its current P/E to its historical P/E. There is some value in doing that. However, I have learned that it’s a more useful exercise to compare the company’s P/E ratio to its direct peers. Just know, the most important thing is to look at P/E relative to peers, not relative to itself.

Let’s start with the WR position group because it’s my favorite group to look at. The following chart should look familiar from Vol. 1. This is the Top 12 WRs (or WR1s) based on 2021 actual points—the last column representing each player’s current P/E.

First off, a little reminder on how to apply P/E ratios. The lower the P/E ratio, the more value you get from that player. A low P/E in and of itself does not make a player a good investment. The chart above says there is more value in Davante Adams (26x) than Justin Jefferson (44x). Again just to be clear, I am not saying Adams is better than Jefferson, just that you are getting more PPG given each player’s current KTC.

Providing a little context, there are 62 WRs in the top 160 KTC, and those 62 WRs have an average P/E of ~26x. The WR1 average P/E is 31x. Remember, P/E ratios are a relative valuation metric. WR1s should trade at a premium to the WR market and especially to WRs drafted in later rounds because their earnings/PPG are of higher quality. That’s why it’s important to look at each player against their direct peers.

Although the WR1s are similar in that they all produced at the top of the group in 2021, this is not the most effective way to look at relative value in the space. The biggest reason for that is age. If you just looked at this WR1 chart and put it to work, most of your Buys would be older guys, and your Sells would be younger guys, which is probably not the best strategy from a dynasty perspective. This gets into what trajectory a player’s PPG is on. Older players’ PPG tends to be close to peak, peaked, or even declining. Thus his P/E ratio should trade at a discount to younger players whose PPGs are usually rising. This brings us to a new way to slice up a position group called Clusters, which will allow us to compare P/E ratios of a player’s most relevant direct peers.

I was first introduced to clusters by @DFBeanCounter & @FF_RTDB of Bulletproof Fantasy Football. This concept is one of the more innovative ways to think about rankings/tiers I have ever seen. The main point is that each player is put into a ‘cluster’ of players with similar production levels, age, and upside potential. Clusters separate players into like-for-like categories, making it ideal for P/E ratio analysis. Please read more about clusters with this Twitter thread from Drew:

Here is a chart that shows the average P/E for each of Drew’s WR clusters.

Reversion to the mean

As it relates to P/E, reversion to the mean is a theory used in investing that suggests a stock’s P/E will eventually revert to the long-run average. This concept can help us come up with an intrinsic P/E for players. For instance, Ja’Marr Chase trades at a P/E of ~50x. His peer group trades at an average P/E of ~47x. Mean reversion would lead one to believe that over time Chase’s P/E would revert closer to the average P/E of ~47x.

On average, this cluster trades at ~39x. Let’s take a look at Diontae Johnson a little closer. Let’s say you have the opinion that the Steelers are going to get an upgrade at QB this year, and you think Diontae should be valued more in line with his peers. Currently, Diontae trades at 31x, but you think he should trade at his peers’ average P/E of~39x. Now we will plug the variables into the P/E equation and solve for an intrinsic KTC. So, KTC = 39 [P/E] * 17 [PPG] * 10 = 6630. Diontae’s current KTC is 5363, and you think his fundamental/intrinsic KTC should be 6630, so in your opinion, Diontae has ~25% upside to his current price. Now, as an analyst, you can quantify how much upside/downside a particular player has from a valuation perspective. I believe this could be tremulously useful.

In addition, one could also believe that Diontae should trade at a discount to his peers, for whatever reason (cough DROPS cough), but that you think better QB play will raise his PPG a full point next year. From 17 PPG to 18 PPG. Let’s see what his KTC comes out to be using 18 PPG and his current P/E of 31x. KTC = 31 [P/E] * 18 [PPG] * 10 = 5580. Again, Diontae’s current KTC is 5363, and you think his fundamental/intrinsic KTC should be 5580, so in your opinion, Diontae has ~4% upside to his current price. As a fantasy football analyst, if you speak from this perspective, imagine how much more of an impact you can have on your audience.

Know what you don’t know

Few experts can provide insight into whether a player’s projected PPG is too high, low, or just right. I am not one of those experts. I don’t have connections to the teams or great insights on how coaching changes or scheme changes will affect a player’s results. For my purposes, I’d rather just rely on the experts and assume they are embedding all of their conclusions into their projections. Then when you roll up all the experts’ projections into a consensus, that consensus is the best available estimate given everything we currently know. I’d love for the experts out there to use these tools to present their case on why a particular player has upside or downside.

Now going through all the clusters and comparing each player’s current P/E with its cluster’s average P/E, you can come up with a target price & target PE for each player. Then you can calculate the upside or downside from the player’s current price. After doing that analysis, here are my WR top buys and sells.

For example, Super Bowl MVP Cooper Kupp currently has a KTC of 6142 and a current P/E of 24x. Using a peer multiple of 28x for Kupp would give him a target KTC (price) of 7213, which is ~17% upside from current levels.
One more point to articulate here. Around mid-summer, we will roll the P/E ratio forward and move from actual 2021 PPG to projected 2022 PPG. Just like there is mean reversion on P/Es, I fully expect there to be mean reversion when it comes to projecting 2022 PPG. Cooper Kupp had his best season in 2021; however, I fully expect his PPG projections to revert closer to his long-term average. This will impact his P/E ratio and may affect my recommendation on him and others, but we will cross that bridge when it comes.

How cool would it be, as an analyst, to not only tell your audience that a player is a buy, but that he currently trades at a discount based on P/E valuation, and then be able to offer a target KTC(price) and his upside from current levels? One could even rank order your buys/sells by upside/downside.

When I say someone is a sell, I’m saying they are a sell at the current KTC prices. I’m not saying you sell for peanuts just to offload him. If you can’t get the premium price on a sell, then hold. Now, remember these recommendations have nothing to do with the players themselves and have nothing to do with real football. All we are doing is applying valuation techniques to fantasy football.

I love Ja’Marr Chase. In my opinion, he is one of the best WRs in the league. I have Chase on the majority of my fantasy squads, but I didn’t pay current prices for him. I got him in rookie drafts or at a good price in redraft or start-ups leagues. As mentioned above, Chase is currently trading at a premium to his direct peer group and WR1s, so it might make sense, from a valuation perspective, to trade him for way more than he’s worth and capture some of that value. It’s also good to just let the really good players ride. Although Chase is slightly more expensive than his peer group, he doesn’t stick out as much as my top sells listed above.

The point is we are trying to think differently about price and value in fantasy football. When stock analysts give recommendations to buy/hold/sell a company, that recommendation usually comes with a target price and how much upside there is. Using this process, now you can do the same thing with fantasy football recommendations. I can say Diontae Johnson is a Buy and my price target for him is 6688 (KTC), representing ~25% upside from current levels.

Next in this series, we will look at buys and sells in the RB group. I’m looking forward to slicing up the position and giving you guys some real actionable advice to help you win your dynasty fantasy football leagues.

That’s it for now. Please follow along on Twitter @_JasonStein and let me know what questions you have and how I can help. Use promo code “INVESTOR” for 15% off any Dynasty Nerds membership.