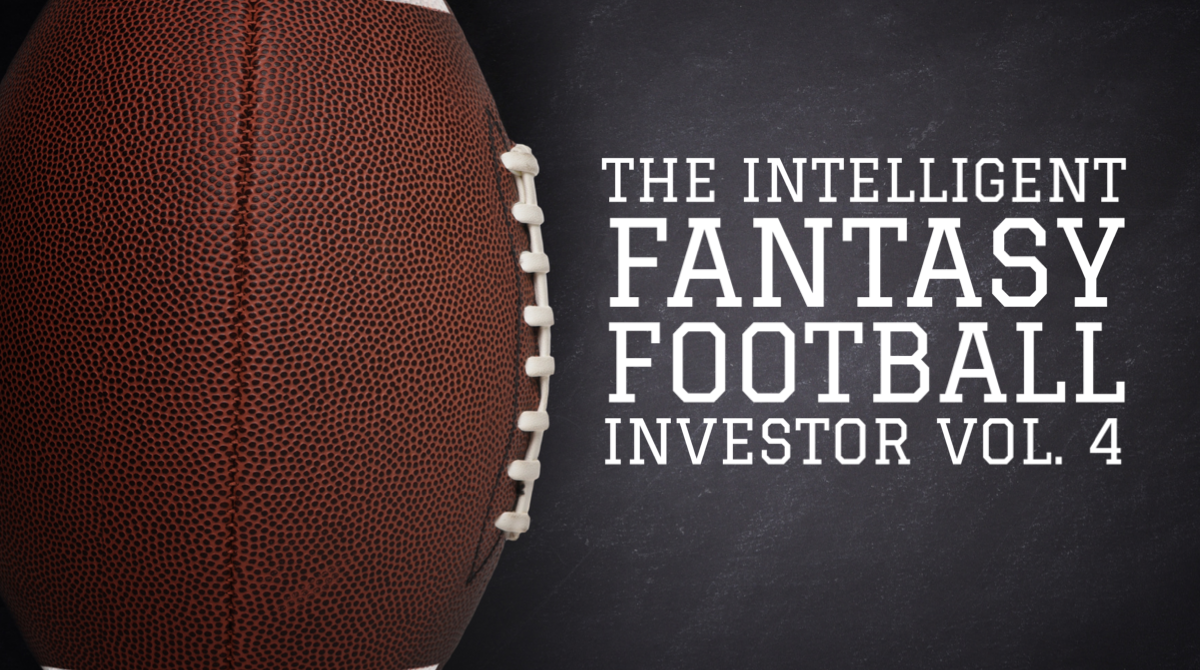 This series builds off each volume, so if you haven’t read The Intelligent Fantasy Football Investor Volume 1, Volume 2, or Volume 3 yet, please stop now and go read them on Dynasty Nerds. The purpose of this series is to bring investment concepts and a different thought process to the fantasy football community. The point is, let’s think differently and try to win some dynasty leagues.

To summarize, we are talking about a new way to look at value in fantasy football. The premise is that fantasy players should be valued based on the relationship between a player’s price and his earnings. This leads us to this equation: P/E = KTC / PPG (note: divided by 10 for simplicity). Then we talked about how to apply P/Es as a valuation framework using clusters, comparable analysis, scenario analysis, and sensitivity analysis to help determine a player’s fundamental value to help you create value for your dynasty team.

Now let’s look into more investing concepts (compounding) and apply some of these valuation concepts to QBs.

In investing, compounding means making money on money. It’s commonly talked about when referring to compound interest. Where if you hold your money in an interest-bearing account, you are paid interest every month based on the amount of money you hold in that account. And each month, the account balance increases because you are adding interest payments to it. Thus, you are earning interest on interest, hence compounding. Just like interest, the same principles hold for wealth. As you build more and more wealth, that wealth can earn more for you, and you can compound your wealth over time.

In dynasty fantasy football, it is possible to compound your wealth as well. The way to do it is to trade down the price curve, accumulating draft picks while not giving up ‘too’ much production. Where we are creating value is in the accumulation of draft picks. Draft picks are almost always rising in price (until you use them), never get hurt, and are a common medium of exchange (i.e., there is always a market for them). And the best part is now that you have a guaranteed appreciating asset, you can use those assets to create wealth for your dynasty team. Here is an example using QBs of how to trade down the price curve and compound.

Let’s start by trading down the price curve with one of the highest-priced QBs on KTC at the moment, Josh Allen of the Buffalo Bills, using the KeepTradeCut.com trade calculator.

Josh Allen is currently one of the best dynasty fantasy assets, but he wasn’t always. Last year Josh averaged 24 ppg, which is well above most QBs, and 2 ppg more than the next highest QB. In fact, in the last two seasons, Josh has averaged 24 ppg, with his four-year career average at ~21 ppg.

Here’s where the compounding part comes in. Now let’s say you think Justin Fields can get into that elite cluster with Josh Allen by year three. That elite cluster is 20+ ppg and under 30 years old. If that’s the case, you now have a QB that you think has similar production throughout his football career, and you accumulated a ton of picks.

One of the best ways to create value is through rookie picks. You can use them on good rookies or trade them for undervalued assets plus more picks. In the Josh Allen/Justin Fields example, if you can hit on a couple of the 1sts or 2nds you acquired, you can use those assets to trade down the price curve again and accumulate more picks. Keep doing this, and you can see the effects of compounding. Letting your wealth create more wealth.

Each player is put into a ‘cluster’ of players with similar production levels, age, and upside potential. Clusters separate players into like-for-like categories, making it ideal for P/E ratio analysis. Please read more about clusters on Twitter from @DFBeanCounter of Bulletproof Fantasy Football.

Here is a chart that shows the average P/E for each QB cluster using KTC prices on 3/16/22.

Now going through all the clusters and comparing each player’s current P/E with his cluster’s average P/E, you can come up with a target price & target PE for each player. Then you can calculate the upside or downside from the player’s current price. After doing that analysis, here are my QB top buys and sells.

Again, when I say someone is a sell, I’m saying they are a sell at the current KTC prices. I’m not saying you sell for peanuts just to offload him. If you can’t get the premium price on a sell, then hold. And, remember, these recommendations have nothing to do with the players themselves and have nothing to do with real football. All we are doing is applying valuation techniques to fantasy football.

Reminder: around mid-summer, we will roll the P/E ratio forward and move from actual 2021 PPG to projected 2022 PPG.

One other common investment strategy investors use when performance is measured on a relative basis is pair trading. The concept is two very similar assets, where one is overvalued, and the other is undervalued relative to each other, so a stock analyst will say to buy the undervalued name and short (or borrow and sell) the overvalued name.

Here is the pairs trade I’d recommend for QBs: buy Justin Fields and short Trey Lance. I like both of these QBs, neither of them is on my top buy/sell lists. However, Trey Lance is 550 KTC higher than Fields, and it is my opinion they should trade at similar prices. I’m not sure if that means Fields moves up 550 KTC, Lance moves down 550 KTC, or they meet somewhere in the middle. Just that their prices should converge over time, if you put this idea to work, I think you can create some value.

In this volume, we talked about valuation applied to QBs using P/E, clusters, & comparable analysis to give you some top buy/sell ideas and a near-term pair trade. We also talked about the tremendous way to create value in dynasty football by compounding your assets, wealth creating more wealth.

Next in this series, we will look at buys and sells in the TE group. I’m looking forward to slicing up the position and giving you guys some real actionable advice to help you win your dynasty fantasy football leagues.

That’s it for now. Please follow along on Twitter @_JasonStein and let me know what questions you have and how I can help. “Use promo code “INVESTOR” for 15% off any Dynasty Nerds membership.”