The Denver Broncos recently sent a draft haul away to acquire Russell Wilson. How do they fill the rest of their team needs in the upcoming NFL Draft? 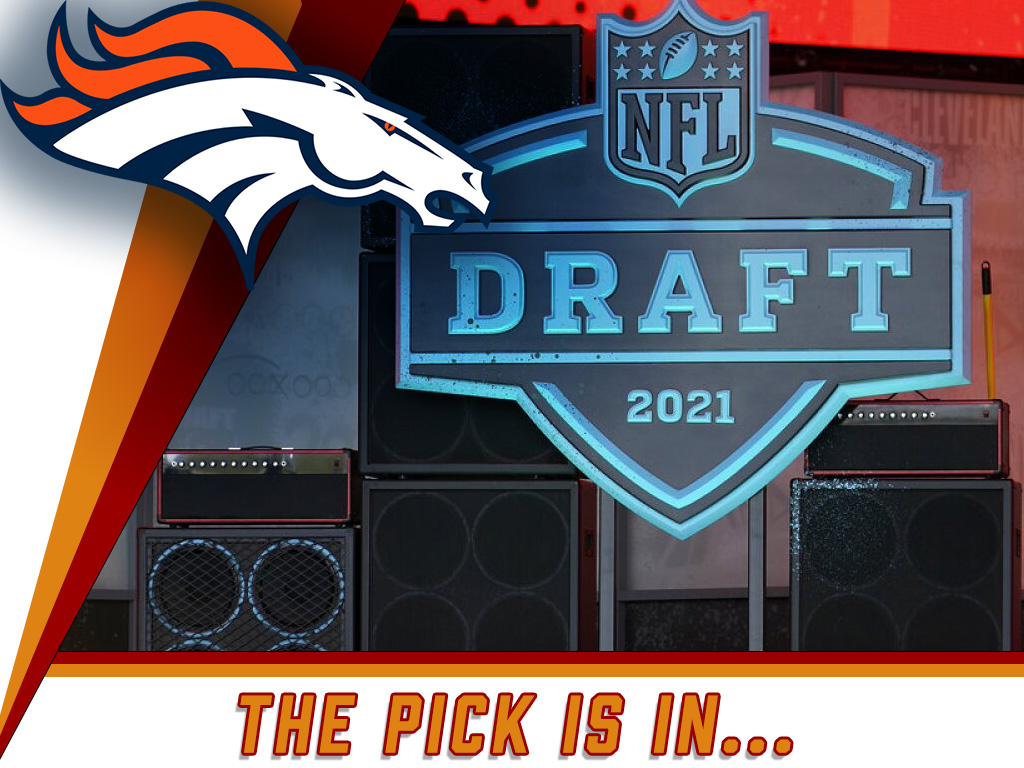 Dynasty fantasy football is a year-round affair. A sharp manager will be thinking about all aspects of the dynasty season at all times. Those managers who are keen enough to look ahead will be the ones that can grab themselves an edge over the competition. A large portion of the dynasty off-season will be spent discussing incoming rookies and the related topic, the NFL draft.

It is easy for us to fall in love with the next workhorse running back or prototypical alpha wide receiver, but a manager that is in tune with the entire draft class as a whole will find themselves ahead of the game. Whether scouting the next road-paving interior offensive lineman or genetic freak edge rusher, we can find ourselves at quite the advantage in April by building an entire picture of how the 2022 class will play out. Those that prepare ahead will not be often surprised at the outcomes.

Compensatory picks have not been assigned and will not be included in this exercise. Credit for the mock draft simulation goes to The Draft Network, and team needs are also generated from this site.

The 2021 season for the Denver Broncos was one to forget. Despite a defense that allowed the third-fewest points and ranked in the top half of most defensive team statistics, the Broncos’ offense wasn’t productive enough to complement. Too often, underwhelming QB play necessitated conservative play-calling, and the resulting 7-10 record led to the firing of HC Vic Fangio. The Broncos hired Packers offensive coordinator Nathaniel Hackett to get more innovative on offense. Hopefully, to inject some energy and upside into an organization that hasn’t made the playoffs since winning the Super Bowl in 2015. Until recently, the big question was, what direction would this organization go at QB?

We got that news, and Russell Wilson will move from the Pacific Northwest to the Mile-High City. It should go without saying that he is a massive upgrade at QB. Despite the Broncos dealing away Noah Fant, Wilson will be supported by a strong cast of playmakers. Receivers Courtland Sutton and Jerry Jeudy are fully primed to deliver on their lofty draft expectations. Additionally, second-year battle-ax RB Javonte Williams is already considered one of the toughest players to tackle in the league. Denver is still looking for development along an offensive line that performed well run blocking but gave up too many pressures and sacks. However, with even minor breakouts from young talents like Quinn Meinerz or Lloyd Cushenberry III, this could be the best OL Russell has had in some time.

On defense, 2021 first-round CB Patrick Surtain showed the All-Pro upside that led to his top-10 selection. Justin Simmons truly cemented himself as a premier safety, registering five interceptions and 80 tackles in 2021. Bradley Chubb emerged from the season healthy. He is in the best position to deliver on the promise of his 1.05 draft pedigree in some time. With those three cornerstone defenders, and a group of promising prospects like Caden Stearns, Baron Browning, and McTelvin Agim to offer some depth and upside, the Broncos have the assets on offense and defense to contend in the toughest division in the NFL. The potential is truly unlimited.

Denver has positioned itself to capitalize on the role-player sweet spot in this year’s draft class. After dealing away their first and second-round selections in this and next season’s draft for Wilson, Denver does not pick until the middle of Day-2. However, the Broncos still have five picks in the top-125. With many of the cornerstones in place on offense and defense, let’s see if we can continue to build on the roster depth of this ascending AFC West contender.

Toughness and instincts highlight the career of Jalen Pitre. A versatile playmaker, Pitre is a fearless run defender and intelligent cover player. We’ll have to wait until the March 30th Baylor Pro-Day to confirm speed. However, Pitre tested well in the agility and on-field drills at the NFL Combine. As previously mentioned, the Broncos have a talented safety group. Regardless, Pitre adds a nickel skillset not possessed by Simmons or Stearns. Three safety formations are becoming more popular as NFL offenses spread defenses out. Pitre’s ability to play deep-middle, nickel, and box safety make this selection an easy one.

A product of Fort Morgan, CO, most Bronco fans will not need a long introduction for McBride. The 2021 John Mackey award winner with 90 reception and over 1,100 yards, McBride has excelled for three years at Colorado State. He has the best combination of physicality and after-the-catch skills within this draft class, primarily replacing what Fant provided between the twenties. Combined with red-zone weapon Albert Okwuegbunam, the Broncos keep a sharp one-two punch at TE.

Possibly the most prominent team need for Denver is speed off the edge. Chubb and Jonathon Cooper are good power rushers, but the opposite side speed player is missing. Enter Oklahoma edge defender Bonitto, who possesses one of the fastest first steps in the class. Essentially allowed to play upfield for the Sooners, Bonitto will need to become more sound in run defense. However, the rare twitch and burst he showed on film were displayed at the NFL Combine. He posted a 4.54 40-yard dash and 1.54 ten-yard split. Additionally, he weighed ten pounds heavier than his OU listing, providing evidence that the strength transition may have already begun. Bonitto is flying under radars in a loaded EDGE class and matches what Denver needs; edge speed and twitch.

There is no shame in being the third Georgia LB to come off the board, and Walker addresses a need at ILB. He is excellent at diagnosing and fitting the run and is a potent blitzer on longer downs and distances. With a 6’4” frame and 4.52 speed, Walker would add an element of size and speed to a Bronco LB core lacking both. The position is incredibly deep in this year’s class, and Denver could look to wait and address a more prominent need. However, Walker is my LB6 in the current class and can start right away; the value was too enticing.

Formerly a teammate of Patrick Surtain at Alabama, the Broncos add a highly competitive and versatile nickel and outside corner. Jobe measured smaller at the Combine than expected, but he has faced elite competition over two years of starting experience in the SEC. Ronald Darby was signed a year ago in addition to drafting Surtain. However, secondary depth players with nickel versatility are at a premium in the NFL. Jobe can immediately provide that. If he can prove he’s healthy by Alabama’s March 30th Pro-Day, a fourth-round selection may feel like a discount.

Javonte Williams has earned an uptick in touches. However, with Melvin Gordon still in Free Agency, figuring out how to best support a talented runner like Williams should be in the Broncos’ plans. The optimal player would be versatile enough to be used outside of traditional RB touches. They also would have the ability to handle some of a conventional workload during an injury stint for Williams.

Rachaad White is precisely this player. At 6’2” and 214 pounds, he would be adept at handling change of pace and backup duties. Additionally, he is a talented enough route runner to give the Broncos a versatile weapon at WR. It’s rare to find runners who offer this dual-position versatility at NFL-starter size. However, for whatever reason, the NFL mocks haven’t yet caught up to the prevailing fantasy opinion, and he’s a steal here for Denver in the fifth.

In my opinion, Ezeudu is the most underrated player in the class. Sam Howell was under constant duress in 2021, which may explain why this talented Tarheel is overlooked. However, the one true consistent performer for the UNC offensive line was Ezeudu. Utilized at guard and tackle throughout the season and even throughout certain games, Ezeudu is a versatile pass-protector and strong finisher. He provides Denver the floor of a sixth offensive lineman, with the upside to start in a year or two after adding some weight.

The Broncos spent their first and second-round selections on Wilson, amongst other assets. He, therefore, warrants discussion here. If you want a full breakdown of the Wilson Fallout, I will defer you to fellow DraftNerd Andrew Harbaugh’s assessment. I concur with the analysis that little has changed with Wilson’s fantasy value and upside. He’s always been a steady balance of weekly consistency and yearly upside.

However, with a more offensively-minded coaching staff and team, combined with the upside of Denver’s weapons, I’m betting on Wilson having a near-career season in 2022. A change of scenery seemed necessary for Wilson, and I expect he will pay dividends initially for the Broncos. Currently valued by the Nerds Staff as the QB8 in Superflex/TE Premium rankings, he’s an expensive but attainable asset for contending rosters.

The Denver Broncos still come away with an impressive draft haul without their top two picks. A majority of this draft class targeted the defensive side of the ball. Walker should be on radars wherever he lands for IDP managers, but this would be an optimal landing spot. He could start and lead the Broncos in tackles as a rookie. Additionally, Pitre and Bonitto are interesting late-round prospects in upcoming mixed offense and IDP rookie drafts.

We did add two playmakers in this draft, both of which can have a year one impact. McBride is as ready to start at TE as any in this class. White adds an interesting wildcard to an already dynamic offense. However, I imagine that with Javonte Williams on the roster and Wilson’s hesitancy to target TE in the past, many fantasy managers would view these as negative landing spots.

I think this is an opportunity to highlight a macro point specific to this class. The fantasy community widely values both of these players. With such a deep talent pool and minimal consensus about the top player at most positions, unexpected, even undesirable landing spots are inevitable. Don’t overcompensate due to landing spot this season. Being disciplined and sticking to your talent evaluations will be more necessary than usual, especially as we begin moving into Days 2 and 3 of the draft.

That’s all for the revamped and now DangeRuss Broncos. NFL fans, have the Broncos done enough to be the favorite in the loaded AFC West? Broncos fans, how did I do with draft selections? Leave your comments below.

The Prospect Film Room is constantly adding game film, with All-22 film available for many of this year’s dynasty darlings. For less than the price of a cup of coffee a month, you get access to the film room, the invaluable trade and team value DynastyGM tool, as well as rankings from the Nerds Staff. It is the best edge in dynasty! Subscribe to the NerdHerd for all your predraft and in-season needs.