@_jasonstein takes you through a five-round Dynasty Nerds Devy mock draft, where we remove the 2023 draft-eligible class and add in the 2026 class. 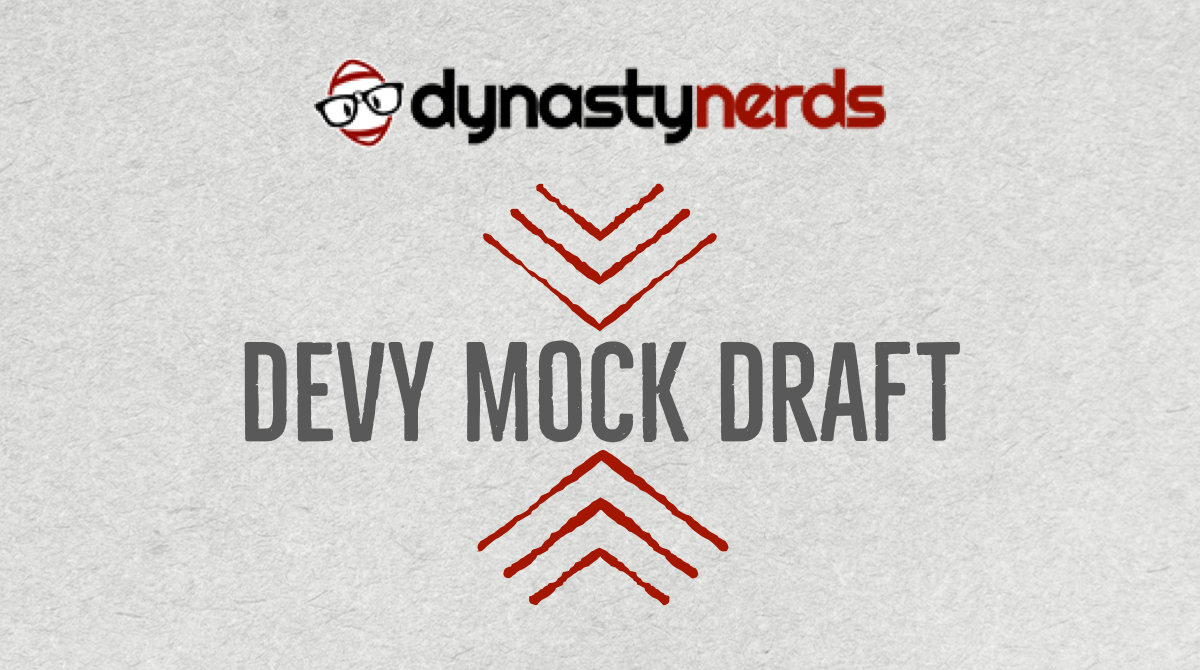 This is our Dynasty Nerds (#DevyNerds) December Devy mock draft. Our seventh devy mock draft in this series. But it is our first mock without the 2023 draft-eligible class and including the 2026 draft-eligible class. Now that the CFB regular season is over, it’s time to roll over the available devy players to what you will see next year. I’m sure rankings and ADP will change as we work through the offseason (recruiting, coaching changes, spring games, fall camp, etc.). But doing these mocks monthly will hopefully keep you up to date on the latest devy movements. Once we get a few of these in, including the 2026 class, we will include some average draft positions (ADP). Please, check out the links to our Devy spotlights brought to you by the Dynasty Nerds Devy team at the beginning of each round.

Here is the setup. This is a Devy Mock draft. The format is a twelve-team Superflex (SF), PPR & Tight-End premium (TEP) league with standard roster construction.

We start this devy mock with this year’s Heisman Trophy winner Caleb Williams. Williams will probably be the consensus devy 1.01 until he is drafted, probably first overall, in the 2024 NFL draft. The rest of the round one devy quarterbacks are Drake Maye (UNC) and Quinn Ewers (Texas), both 2024 draft eligible.

He didn’t win the award for best wide receiver, but I think most people regard Marvin Harrison Jr. as the best wide receiver in college football this season. Harrison Jr. will likely be a top 5 devy pick for this next cycle. The other wide receivers taken in the first round are Emeka Egbuka of Ohio St. and Kayshon Boutte of LSU. Boutte recently decided not to declare for the NFL and will spend another year in school.

With Bijan Robinson leaving, it’s going to take time to figure out who the new devy RB1 will be. In this mock, we see Sanders, Judkins, Henderson, Shipley, Singleton, & Edwards go in the first round. I’m sure all of those guys, and maybe a few others, will be jockeying for devy RB1 next season. But right now, there is no clear-cut order for the group.

Cade Klubnik goes first in round two, and I feel that with an entire season starting at Clemson next year, he’ll be moving up to the first round shortly, duking it out with Quinn Ewers for devy QB3. And don’t forget about Drew Allar at PSU, either. He’ll also get a chance to push his way up the ranks next year.

And we have our first class of 2026 guy to go in the second round as @mastapj takes Malachi Nelson with the 2.05 pick. Nelson is the third-ranked player in this incoming freshman class according to 247 sports composite rankings. And he is ranked as the second quarterback in the class. He’s ranked right behind Arch Manning, who is taken at pick 2.11 in this draft. There are quite a few to-be freshman quarterbacks selected in this devy mock. This may indicate that quarterback might be a strength of this incoming freshman class.

After six running backs go in the first round, we only see two in the second round in Allen and Robinson. There seems to be a little uncertainty about running back prospects after 6-7 guys, so drafters opt to go after wide receivers and quarterbacks they have a better feel for. And, of course, I have to mention Brock Bowers is selected at pick 2.03 as the first tight end off the board, as he should be.

I could sense that drafters were a little less sure about the top devy players available starting in round three. We saw two more to-be freshman quarterbacks selected this round: Dante Moore, who flipped his commitment to UCLA recently, and Nico Iamaleava, who will play for Tennessee. And our first non-quarterback to-be freshman was selected with pick 3.08, and that’s wide receiver Zachariah Branch with USC. If he can find the space to play right away, he’ll get a chance to catch balls from Caleb Williams this season, which could be ideal for a fast start to his college career.

At the start of round four, Michigan quarterback JJ McCarthy looks like a bit of a value after leading his team to a victory over rival Ohio State in The Game. And Ja’Tavion Sanders is now firmly up to devy TE2. There are a few other tight ends to watch, but it looks like the top of the devy tight end ranks are Bowers and Sanders.

Quite a few more to-be freshmen go in the fourth round as Nerds devy analysts are starting to make early calls on who they like in the 2026 class. We see Cedric Baxter, Bandon Inniss, Justice Haynes, Rueben Owens, & Jurrion Dickey all go in round four. All of those guys are very highly ranked on 247 Sports composite rankings.

And finally, wrapping it up with round five. I start things off with Jaydn Ott, who statistically had a great first year but made it to round five. Devin Leary goes next, and we just found out he will be filling the shoes of Will Levis next year as he announced he would be transferring from NC State to Kentucky. I can see a lot of potential with the guys selected in the fifth round. And there is lots of talent left on the board that just didn’t quite make the cut.

You have seen how each round went down; now, let’s look at each team’s roster. It’s just as important and informative to see the roster breakouts as it is to see the draft order. Furthermore, looking at it from the roster perspective, you can get an idea of how you can build a Devy pipeline of all different shapes. Look at the Rosters picture above for some excellent examples of building an effective Devy squad. And here is one of our Nerds drafter’s comments on how his devy draft went.

“Getting a near lock first-round NFL draft wide receiver at 1.10 seems like a steal. After that, I got two very high ceiling tight ends (24 class) and two 5-star quarterbacks (26 class). In a non-C2C styled league, I like to go for ceiling just like I did hear.”

That’s it! I hope you enjoyed the December Dynasty Nerds Devy Mock draft. The entire Devy team is here to help, so please contact any of us if you need anything.