Landing Spot Lottery: Will this be good for fantasy production?

NFL mock drafts are fun to look at the landing spots of future fantasy assets. @Culture_Coach dives into some RB landing spots to analyze the fantasy impact. 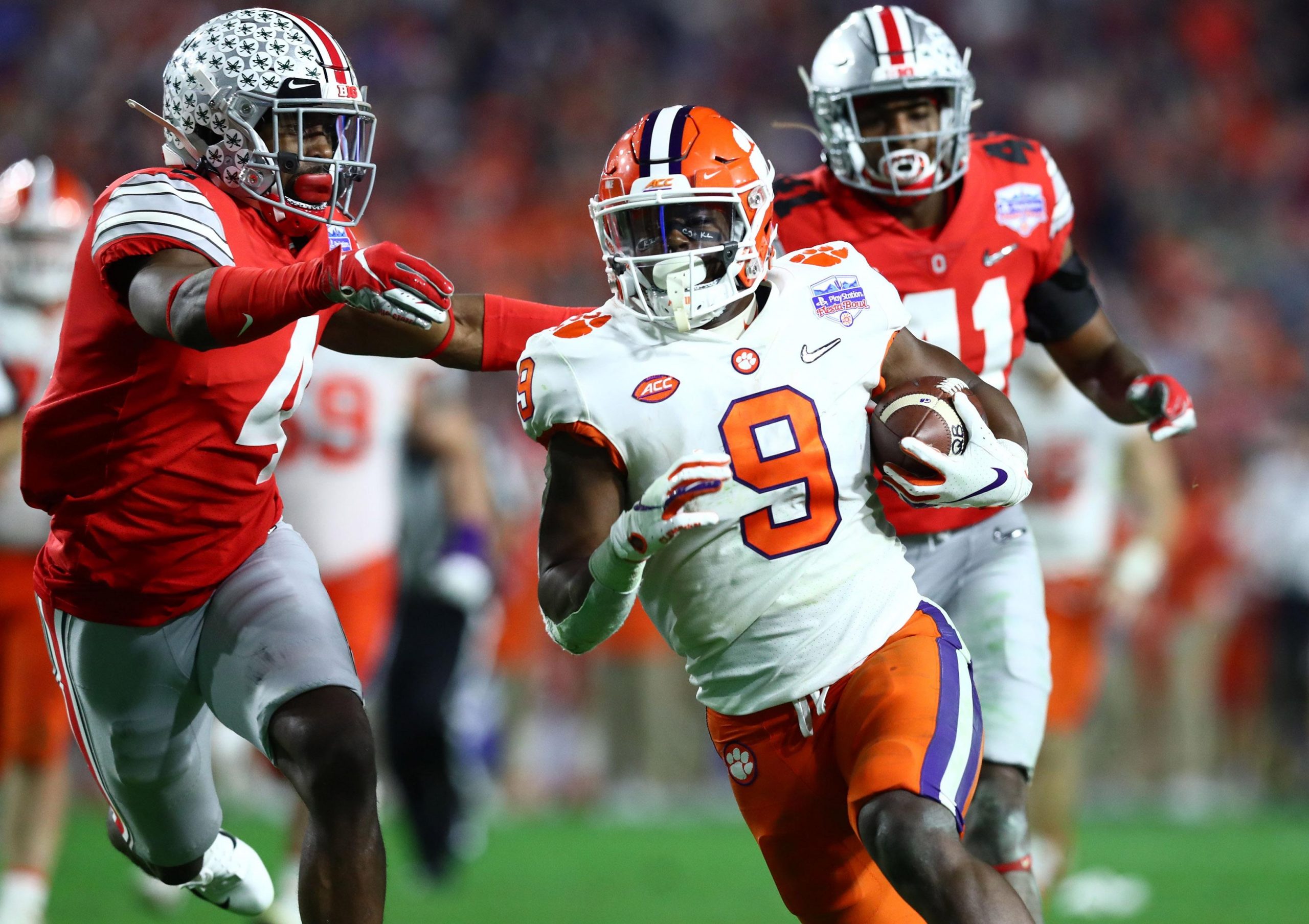 We are less than two weeks from the NFL draft. Here at Dynasty Nerds, we have put out mock drafts speculating where players will go in your rookie drafts. You can find them here. In this article, I took a look at a mock draft from Lines.com to see where they have the top running backs landing and what this could mean for their fantasy production.

This mock was released on April 12th. It falls in line with the recent trend of no running backs drafted in the first round. Let’s take a look at the landing spots.

The Jets have a lot of holes to fill. A lot! The trade of Sam Darnold to Carolina put the Jets in line to take the second quarterback, presumably Zach Wilson, at 1.02. Many mocks have had the Jets taking an RB with their second first-rounder 1.23. Here the Jets select Alijah Vera-Tucker at 1.23 and hope an RB falls to them in round two.

When the Jets get on the clock for the 2.02, all of the top running backs are still on the board. New offensive coordinator Mike LaFleur brings the Shanahan one-cut offense with him to New York, which should be a good fit for Etienne’s skill set.

Initial impressions are that San Francisco was a much more run-heavy team than the Jets in 2020. In reality, the 49ers ran the ball just 31 more times than the Jets. I expect the Jets to protect the quarterback they draft at 1.02 by running the ball. Adding Etienne to a roster with veteran Tevin Coleman, Ty Johnson, and last year’s fourth-rounder Lamical Perine should give the rookie an opportunity to move to the head of the committee.

In this landing spot, I’d temper my expectations for year one. Making Etienne a trade target mid-late season in preparation for the 2022 season would be the move for me.

Harris is a real film vs. analytics conundrum. Old coming into the league, Harris has the analytics team down on him with a late breakout age. Watching the film, you see sweet feet, power, and pass-catching ability.

Landing Harris at 2.04 gives Miami the complete back not currently on the roster. Harris combines most of the best aspects of the current Miami backs, Myles Gaskin, Salvon Ahmed, and Malcolm Brown, into one running back. The one thing Harris lacks is long speed. However, he is fast enough to break off big chunks even if he isn’t going to take it 80 yards.

In Miami, I expect Harris to jump to the top of the depth chart quickly. If he can pick up the pass protection schemes, I believe he could be the rookie RB1 in 2021 in Miami.

Oh, boy. This is a nightmare landing spot for one of the top backs in the draft. Tampa has a veteran quarterback who will dictate which running backs are on the field. If the back gives up a QB hit, we may not see him again the rest of the season. Add in veterans Leonard Fournette, Ronald Jones, and second-year back Ke’Shawn Vaughn, and this is a nightmare scenario for fantasy.

All is not lost, though. We have seen Fournette shown the door unceremoniously in Jacksonville. While Fournette was a playoff hero, he was pretty non-descript, backing up Jones in the regular season. Jones is another story. Set to be the starter last season, and he was when healthy, he is a one-dimensional back. Jones is not a pass-catching threat. Vaughn saw very little action as a rookie. However, at Vanderbilt, he was a good all-around back.

Williams landing in Tampa could see him slide down rookie draft boards. This slide could create value for the patient dynasty manager. Grabbing Williams in the late first after a landing spot slide would be a steal.

Carter to Philadelphia would be a puzzling move to those who roster Miles Sanders. Carter is a little smaller than Sanders, but their games are similar. If the Eagles were to use the two in a committee, I would see a nearly even split in touches with Sanders getting the edge in carries and Carter getting the edge in targets.

Carter was a four-year contributor in college, splitting the last two years with Javonte Williams. At 5’8″ 200 pounds, Carter presents a bit small, however, he has the same BMI as Najee Harris. A second-day draft capital for Carter to a team with Boston Scott, Corey Clement behind Sanders would put him squarely in flex consideration and a top 0RB target, in my opinion.

The Steelers have a big hole at the running back position. In this mock, they played a game of patience by grabbing an OLB and OL in the first two rounds, filling other needs. I don’t know if I would read this as having confidence in the current RB stable – Anthony McFarland, Benny Snell, Jaylen Samuels, and Kalen Ballage. It does leave Sermon with an opportunity to take the job.

The Steelers led the league in pass attempts in 2020. Some of this can be attributed to a poor run game. 2021 looks to be the last hurrah for Ben Roethlisberger, and with a WR corps of Dionte Johnson, Juju Smith-Shuster, Chase Claypool, and James Washington, it should be pass-heavy again.

Sermon is a good all-around back who combines the traits of the guys on the roster into one body. I could see Sermon come into Pittsburgh and win the starting job and put up a low-end RB1 season. Landing in Pitt would put him squarely in the RB4-5 running for this rookie class.

Much like Carter to Philadelphia, this is another ‘WTH’ landing spot. Fantasy managers will have to buy into the 51 receptions last season at Memphis, meaning Gainwell supplants Devin Singletary as the passing down back in Buffalo. I can see it, but with the addition of Matt Breida to a backfield of Singletary, Zack Moss, and now Gainwell, it looks to be quite a mess.

The Bills threw just 75 targets to the running backs in 2020, with Singletary leading the way with 50. Singletary has a dead cap number of just over $500k, so cutting him is an option. Buffalo was 11th in the league in pass attempts in 2020. If Gainwell can settle in as the lightning to Zack Moss’s thunder and garner about 130-150 carries and 60-90 targets, he will pay off his second-round rookie draft capital.

There you have it. The top running backs in the draft landing in some good, some not so good for fantasy spots. Do any of these landing spot move guys up or down your rankings? Do you have the patience to wait for the talent to ascend in some spots?

🆕 Can Keenan Allen finish as a WR1 once again or will he be slowing down? Is the time to sell now? Check out @DarthDbacks projections
https://www.dynastynerds.com/does-keenan-allen-have-another-wr1-season-in-him/

The Omen- What does Damien mean for David Montgomery’s fantasy value?
How Vegas win totals can give dynasty players an edge
Training Camp Sale!