The Dynasty Nerds teams hits you with Round 1 of the Post NFL Draft 1QB mock draft. 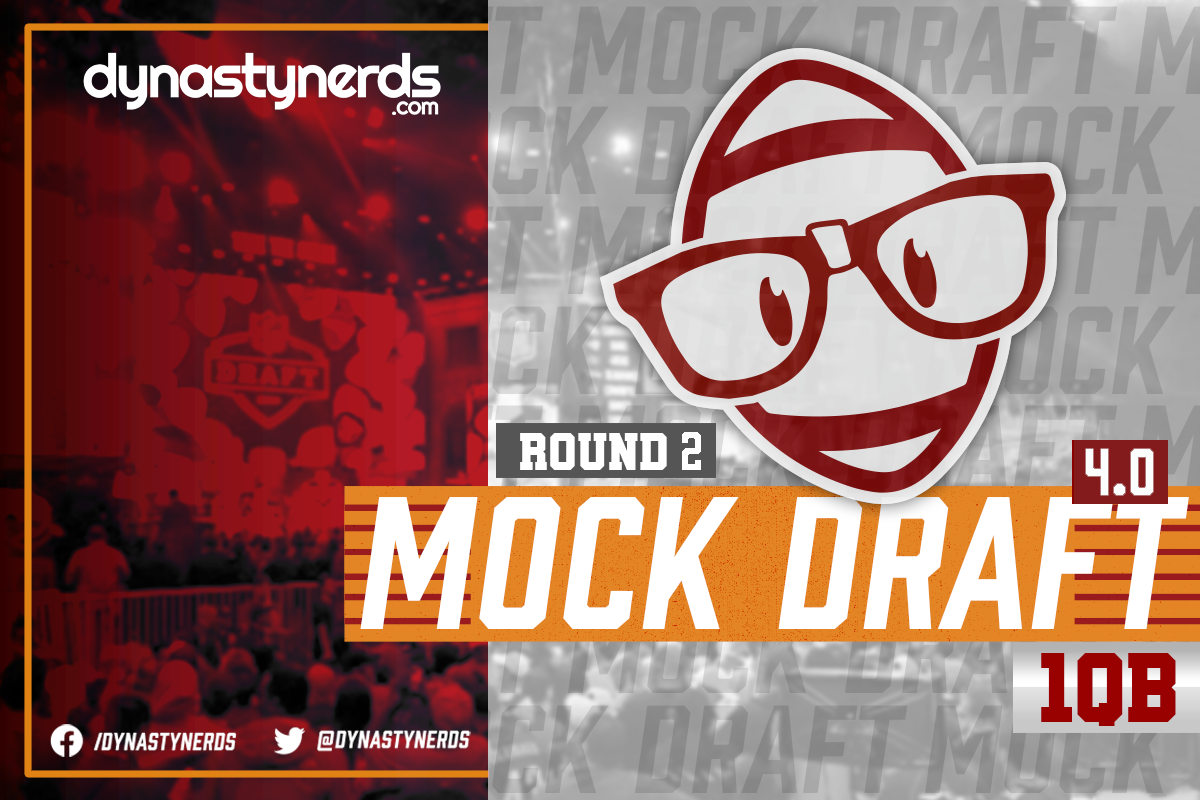 Whew! This was quite the weekend, wasn’t it? The NFL Draft took us all for twists and turns. How did your favorite rookies fare? Who increased in value? Who plummeted? On with our staff’s Rapid Reaction Rookie Mock draft! You can find Round 1 here.

This is a beautiful landing spot for Rachaad White. White was profiled as one of the better pass catchers in the class, with 43 receptions last year alone. Tom Brady loves his pass-catching running backs and pardon the terrible pun, but we can see him in the James White role in 2022. Giovanni Bernard is in a contract year, and Fournette has two years left. Rachaad White could be the running back of the future on this team.

This pick seems to be on the precipice at the end of a tier of non-flyer players I’d want in a single QB league, so if you have picks hanging out in the mid-two range, you may want to consider coming up here. I like James Cook well enough, but I did not love his landing spot in Buffalo. Too many mouths and not enough goal-line chances. Cook is Devin Singletary 2.0 on a team that already has Devin Singletary, but more importantly, they have Josh Allen, who eats red zone running back touches for breakfast.

James Cook was the end of an obvious tier, so I would prefer to trade this pick to acquire additional assets. Robinson is the obvious upside pick with this selection, though. He has an elite analytical profile with top 50 draft capital to boot. I trust Daboll to get the most out of this offense, and Robinson has a clear path to targets. He is undersized but has a similar profile to Elijah Moore and Marquise Brown and is bigger than Rondale Moore. The modern-day NFL is ready to ditch what it means to be a prototypical wide receiver, and as always, draft capital is king.

Coming off an ACL tear and lacking the flashy upside of other more athletically gifted receivers, John Metchie fell into the middle of Round 2. Metchie is a fluid intermediate and shallow route runner and possession first receiver. His fall and game are oddly reminiscent of Keenan Allen. Like Allen, who fell after suffering a season-ending knee injury in his final collegiate season, I expect he will vastly outperform his 44th overall draft slot once fully healthy. Davis Mills remains a work in progress but showed promising glimpses in 2021. Brandin Cooks remains the number one and big-play threat in Houston. However, John Metchie can become a trusted third down and red-zone weapon early in his career.

I initially flip-flopped a few times on taking Bell at this spot (classic Rookie Draft overthinker), but it quickly became obvious that Bell is a great selection here. He’s a polarizing prospect with well-documented concerns (athleticism, separation). Still, he projects as a day one ready WR with above-average route-running skills who will fit nicely working out of the slot for the Browns. David Bell is a well-rounded player with strengths in many aspects of the position, and as he develops, I wouldn’t be surprised to see him become a staple of NFL offenses for a long time to come. He will be a consistent contributor to your fantasy team as well.

I feel much better here about taking the top TE in the class than reaching for a much lower tier player at another position. Trey McBride will likely start his NFL career behind Zach Ertz in the pecking order, but TEs notoriously take a few years to develop anyway, and Ertz should prove to be a great mentor. McBride got the draft capital that we hoped he would and landed in a high-powered offense. He has good athleticism and fantastic receiving skills, which should translate well to fantasy football.

Dameon Pierce is a stud. I hope you’re not worried about Rex Burkhead because he will not stop the Pierce train from leaving the station. Dameon is a perfect back for them and will do everything they ask of him. He will be able to run plenty, catch passes, and has the highest upside in this spot over any RB besides Hall or Walker. Pierce will get a ton of opportunity and playing time in year one, and that’s crucial for your fantasy RB.

Isaiah Spiller looked to be a top 3 RB from this class early in the dynasty offseason, but the NFL combine began the descent of his value in rookie drafts. Between that and his Day 3 draft capital, it seems that the second round will be the appropriate place to draft him. However, his value is well worth the 2.08 selection. He was drafted by the Chargers, who I believe will find ways to use him as the RB2 in their system. Ekeler will be 27 when the season starts this fall, so I would not throw out the idea of Spiller becoming a starter in a few years.

The Cowboys dealt Amari Cooper, and while having Ceedee Lamb, Michael Gallup is coming back from injury. I had concerns about depth at WR, but Jalen Tolbert gives them a field stretcher than can allow Lamb to play in space. I like this landing spot and think he could be a sneaky sleeper.

Brian Robinson Jr. landed in an intriguing spot when the Washington Commanders took him in the third round. If you haven’t heard much about Robinson Jr., it’s likely because he has been buried on the Alabama depth chart for most of his college career behind future NFL backs like Najee Harris, Josh Jacobs, & Damien Harris. Lance Zerlien calls Robinson Jr. “a linear runner who is likely to be utilized as a complementary bulldozer to help wear down defenses.” The Commanders already have Antonio Gibson as the lead back, and they re-signed J.D. McKissic this offseason to complement Gibson on passing downs. Now they have a big bruiser in Robinson Jr. to complement Gibson in the rushing game. It seems as though this will be a committee back situation, where Robinson Jr. would be a good handcuff for Gibson owners to walk away within their rookie drafts. Gibson has had some history with injuries, and Robinson Jr. is the back you want to roster if Gibson goes down.

Many analysts had Zamir White in their pre-draft top 5. White was my RB6 in this class. He split time at Georgia with James Cook (my RB5) and was the thunder to Cook’s lightning. After suffering torn ACLs early in his career, White settled into average 5.4 yards per carry and scored 22 touchdowns over his last 25 games. The downside is his pass-catching – 17 career passes caught.

The Raiders did not pick up Josh Jacobs 5th year option. White will have an opportunity to learn the Raiders system and make a run for the starting job in 2023. Stashing him on your bench or taxi squad for a year may pay off.

That closes out Round 2 of the post-NFL Draft 1QB Rookie Mock draft.