The Dynasty Nerds team drops Round 2 v2.0. Were the any second round steals in this 1QB mock? 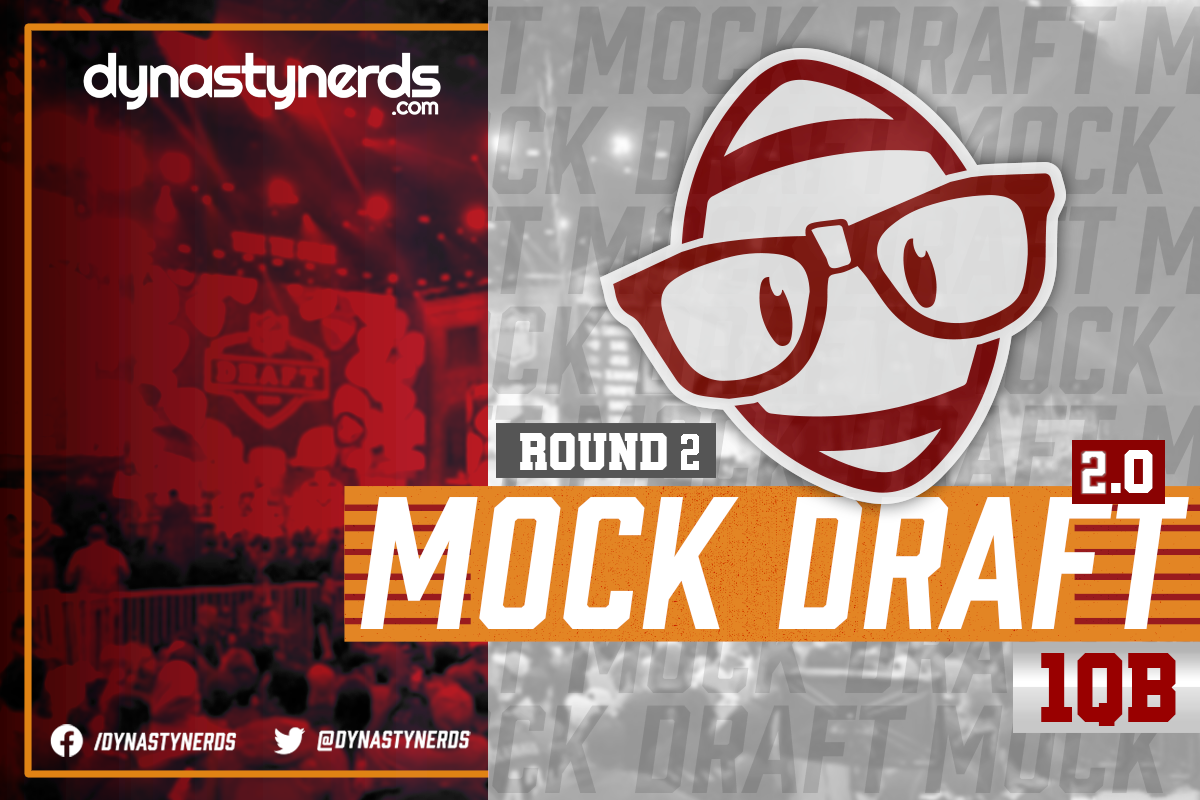 The NFL Combine lands next week. We dropped Superflex 2.0 last week. This week is a 1QB mock draft as we roll on through the offseason toward our rookie drafts.

The opinions on the 2022 draft class are all over the place. The combine will sort some of that out by adding a few more data points for fantasy managers. You can find Round 1 here.

Let’s jump into Round 2.

Obviously, quarterbacks are a bit faded in this format, but to me, that only means you have to shoot for upside. Malik Willis of Liberty shows the most upside out of all the draft-eligible signal-callers. That also goes hand in hand with him having the most volatility in draft capital. Some in the draft community have him going top ten, and others have him going late day two. Either way, it is impossible to dismiss the upside his “tools” imply. He has one of the biggest arms in the class combined with the mobility that we all seek in a “Konami code” quarterback. He has the upside of a Josh Allen paired with the floor of a Jake Locker. That is a gamble that I am willing to take in the second round of a weaker and older draft class.

Dotson could’ve declared a season ago but elected to return for his senior season in Happy Valley. A versatile playmaker, Dotson can win on all three levels but does best on horizontal and quick-breaking routes that allow him to create yards after the catch. Dotson is also highly competitive at the catch point for an undersized receiver. This competitiveness, combined with the balance and agility to adjust to throws, give him a much wider catch radius than his 5’11” frame may indicate. Statistically, he followed a strong 2020 campaign with 1,200 scrimmage yards and 13 TDs in 2021. Despite being the engine of the Penn State offense in 2021, at the NFL level, I view Dotson more as an excellent WR2. Draft capital and landing spot will ultimately influence Dotson’s price in rookie drafts, and this feels like the median for his range as we approach dynasty draft season.

I realize that this selection could be considered controversial by some, particularly given the single quarterback format. In fact, even if a QB is deemed viable here, many will argue that an impressive Senior Bowl was enough to give Kenny Pickett the edge. However, I have always felt that it’s important to go with the best available player and stay disciplined to your board. Matt Corral has a big arm and an acute awareness of defenses. He can escape pressure with ease and has the tools to stick as a franchise quarterback in the right situation. I’d be more than content to snag a player of his potential in the early second round, regardless of the format.

While he missed the Senior Bowl to be there for his daughter’s birth, Ford had a great week of practice in Mobile and has already risen up draft boards. This feels like the right spot for Ford to go in a single QB league. I don’t want to go quarterback, and I think we’ve reached a big tier-break at WR after Dotson. My other choice here would have been Trey McBride at tight end, but even then, I feel like there’s a larger tier break at running back than there is at tight end, which is still plentiful. If Ford gets Day 2 draft capital, he will go in this range, if not higher.

Once again, I don’t know how Trey McBride is still available. He is the best TE in this draft class. In my opinion, he’ll provide you more than some of the other guys already drafted in the 2nd round. He’s a solid player that should blossom in the NFL. He’ll remain on the field constantly, whether it’s blocking or catching. He’s pushing towards Day 1 capital. Look to snag McBride in the 2nd round, especially if you need a TE. I think he will end up with a career ala Zach Ertz.

I decided to go with the hot hand coming out of the Senior Bowl and pick Dameon Pierce from the University of Florida. Statistically speaking, Pierce has not overachieved in college by any stretch of the imagination. This past year he ran for 574 yards on 100 attempts which is nothing to swoon over. It appeared that Mullen did not want to use him very often, which is a shame considering his stature. At 5’9″ and 220 pounds, according to Reece’s Senior Bowl measurements, Pierce is ready for the NFL. He’s shown that he can catch the ball some the past two years with a combined 36 receptions. I believe he has decent upside if he can get into the right system. A good combine will be in order for him to improve his draft stock, given his lack of college production.

When it starts reaching the late 2nd round of 1QB leagues, I start looking for the most value that I can find. Typically that is found in QBs and TEs. It is rare for the 7th or 8th RB or WR to be taken off the board to become a top-24 kind of guy, but it happens with QBs at a much higher rate. So I’ll take my chances on Kenny Pickett developing into a strong franchise QB in the NFL and giving me long-term QB value. While Pickett (along with every QB in this class) hasn’t set himself apart in the QB group, he has shown he has a very strong arm and plenty of mobility. Am I confident he will be a top 10 QB in fantasy? Not at all. But I also didn’t have confidence in Josh Allen or Lamar Jackson a few years ago. Sometimes you have to play the odds, and at this point in the draft, Pickett feels like my best shot.

I had to thank my fellow Nerds for allowing Rachaad White to fall all the way to 2.08 in this 1QB rookie mock. White is in the Williams/Allgeier tier for me, so this feels like the steal of the draft. He spent his senior season vaulting up draft boards while showing off top-tier vision, burst, and receiving ability. With a very NFL-friendly profile, White reminds me of Le’Veon Bell at times. He only solidified his standing in this class at the Senior Bowl. Taking him in the back half of the second round is a no-brainer.

I’m not concerned one bit about Carson Strong’s knee. He’s the QB in this draft with the best arm, and his NFL comparison is Matt Ryan. I’m very happy to bet on that ceiling all day. While the league is shifting towards more mobile QBs, the two QBs in the super bowl are classic drop-back passers. Carson Strong pending on where he lands in rounds 1/2 of the NFL Draft, could be a Day 1 starter and a possible dark horse for NFL Offensive Rookie of the Year honors. Not a bad selection at all near the end of the 2nd round in a rookie draft.

The risk/reward ratio is pretty vast on the once-goated prospect with a generational freshman season. It’s hard to judge exactly how well he will bounce back from a nasty neck injury that sidelined him for a year and a half, but if he’s even 80% of the prospect that he once was, then grabbing him in the late 2nd is an absolute steal. For this draft class, I’m more than happy taking a gamble in the late 2nd for the potential WR1 in Justyn Ross.

Here’s a guy who played for a small school in a low-volume passing offense and, as a result, went relatively unnoticed as an NFL prospect. But when Watson was on the same field with other NFL talent at the senior bowl, he shined and reportedly had the best week of any WR invited. After he caught everyone’s attention, analysts flocked to study his film (which you can find in our Prospect Film Room). He’s a massive WR, he’s extremely fast for his size, and he’s fluid with the ball in his hands, and he looked solid as a route runner. I came away from my study pretty impressed. He does have an issue with concentration drops. He had more drops than contested catches in college. I like swinging for this kind of upside, though, late in the 2nd round.

To round out the draft, I took Alabama’s “other” injured WR, John Metchie III. I don’t think there would have been a chance to get him here if he hadn’t suffered the ACL injury, but this feels like a massive value pick. I would be shocked if he made it out of day 2 in the NFL draft, so similar to my first pick, I assume he’ll be off the board before this spot in most rookie drafts this summer. Metchie isn’t quite the electric speedster that Jameson Williams is, but he is a great route runner and can thrive in the NFL. I’m thrilled with this pick. The other options I considered were WR Wan’Dale Robinson, TE Jalen Wydermyer, and RBs D’Vonte Price and Zamir White.

That is the last of the pre-combine mock drafts. Next week, we will get a few more data points and drop Mock Draft 3.0 after the NFL Combine. Tell us what you thought of this mock by leaving a comment below.