The Dynasty Nerds teams hits you with Round 1 of the Post NFL Daft Superflex mock draft. 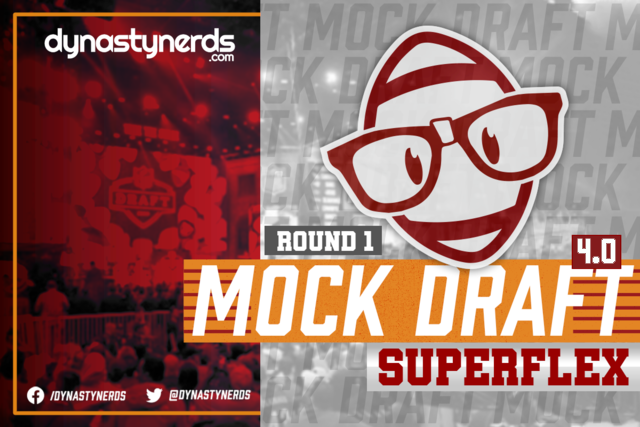 Whew! This was quite the weekend, wasn’t it? The NFL Draft took us all for some twists and turns. How did your favorite rookies fare? Who increased in value? Who plummeted? How different is our Superflex rookie mock draft from our 1QB rookie mock draft? On with our staff’s Rapid Reaction Rookie Mock draft!

This pick has been “locked-in” for months but now we can finally make it official. The best running back in this class lands with Gang Green and is an easy pick at the top of any rookie draft, regardless of format. An argument can be made for Kenny Pickett, but Hall is the pick for me. Michael Carter will be relegated to a backup role. The Jets are investing heavily in this team, and the results will be exciting to see on the field this fall.

I was tempted to go with Walker or my top WR with this pick. However, this is Superflex and quarterback is king. As the only first-round QB in the draft, Pickett holds considerable value. Being drafted to one of the most stable organizations in the league only helps the matter. He may have to wait for a little bit to get his shot, but the writing is on the wall. Give me all the first-round QBs I can get.

London was my WR1 going into the draft, and nothing has changed with him landing in Atlanta, where he is the best WR eligible to play in 2022. He also gets to play with Kyle Pitts for his career. When I landed the 1.03, I thought I would likely take Kenneth Walker if he were still available, but I don’t trust the Pete Carroll hot-hand offense to give Walker the keys to the backfield. Meanwhile, even without a premiere QB, I believe London is the real deal, and getting some assurance with him being the first WR off the board helps confirm that. It also makes me feel better that team doctors feel good about his medicals. Ultimately, drafting this high at 1.03 means my team needs to get consistent producers week in and week out, and London fits the bill.

Getting the RB2 at this spot is a steal. He will get a ton of rushes with the Seahawks, and I see no chance of him being usurped by Penny or Chris Carson. Both are injury-prone. It’s clear the Seahawks are going back to being a run-first offense, which means Walker is the centerpiece. I’ll take a back walking into tons of touches all day.

Garrett Wilson is solidified as my WR1 now that the dust has settled. Great college production, great measurables, and an offense potentially set to explode. The two concerns are simply can Zach Wilson take a step forward, and what will the split with Elijah Moore look like? He will slot in for me after both Hall and Pickett in Superflex rookie drafts, with Kenneth Walker being the only other option I would consider selecting first.

I was high on Olave throughout the pre-draft process, so the elite draft capital is very encouraging. He is my WR3 and profiles as a player who could have an immediate impact. He has 4.3 speed and should complement Michael Thomas well in the Saints’ offense. Olave’s route-running and ability to separate provides a safe, high-floor profile for fantasy managers. In an Ohio State offense with arguably the 2022 and 2023 WR1, Olave still commanded a significant target share while forcing another top prospect to transfer.

At one point, he was my WR1 in the class, but Burks was pushed down throughout the pre-draft process due to concerns over his combine performance, and specifically that he looked out of shape. However, he remained in my first tier of WRs, because I can’t unsee what I saw on tape, and I don’t want to overreact to the combine.

The tape still shows me a size-speed freak who plays with great physicality and has a knack for making explosive plays. Of those tier 1 WRs, I think Burks got one of the better landing spots. He lands in a solid organization and has a clear path to being the Titans WR1 immediately. My concern is a low-volume passing offense that even managed to hold A.J. Brown back. However, I like the upside here, and I love the immediate opportunity to produce for your fantasy team. This is right about where I’m comfortable taking that swing. The cherry on top is that he has Malik Willis waiting in the wings, and a few years down the road, that could be a truly electric duo.

Prior to tearing his ACL in the National Championship Game, Williams was widely regarded as one of the top wideouts of the 2022 draft class. The slender slayer can take the top off a defense and is an elusive magician in the open field. After the investment of first-round draft capital, he joins a Detroit team desperate for receiving help. Post-draft reports indicate that Williams has set a rehabilitation goal of being ready for training camp. If that prognosis is accurate, I feel extremely satisfied with this selection.

Although a third round pick is far from a franchise player, Ridder does have an upside for dynasty. The Atlanta Falcons still have Mariota going into this season, but I wouldn’t be surprised if Ridder got a shot to play at some point this season. With Kyle Pitts and Drake London as his two primary weapons, Ridder could be a nice QB2 in fantasy when he gets his chance to play. I believe it’s only a matter of time until Ridder takes over the QB1 from Mariota and will be an excellent young asset for dynasty football managers.

Skyy Moore is the exact WR the Chiefs needed to add after trading away Tyreek Hill to Miami. Not only does Moore have excellent speed (4.41 40 time), but he is also a very twitchy WR that can create consistent separation. Moore should fit right in with Andy Reid’s system and be a contributor from Day 1.

I have been high on Dotson the whole time, and he was my WR5. Getting first-round draft capital was nice to see. Washington has needed to get a second option to Terry McLaurin, and I think they found it. Their second-leading receiver last year was J.D. McKissic, with 397 yards. Dotson is great in space and should be able to be plugged in right away. At 1.10, I am happy to get Dotson as the 8th WR off the board.

Just when I’m out, you pull me back in, David Bell. Look: Bell is about as fast as molasses, but he runs decent routes, got Day 2 capital, and is elite at the catch point. Moreso, he’s at least the WR2 for a Deshaun Watson-led offense, and he was drafted to play his natural power slot role. I was 100% done with Bell, but I think there’s a task chance he pushes for 1k as a rookie this year.

That closes out Round 1 of the post-NFL Draft Superflex Rookie Mock draft. Keep your eyes peeled for the second round of the 1QB and Superflex mock drafts coming soon.