The Dynasty Nerds teams hits you with Round 2 of the Post NFL Draft Superflex mock draft. 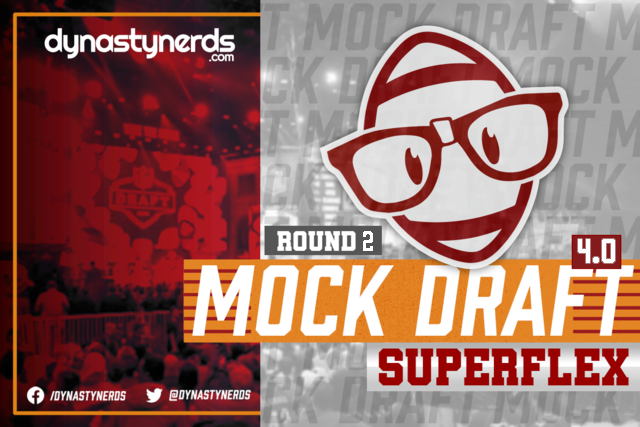 Pittsburgh has a storied history of successfully drafting at the wide receiver position. At some point, we just have to trust the pro scouts over our observations. I am fine buying into the Pittsburgh scouting team and selecting George Pickens here. The quarterback situation may scare some off, but I am buying into the talent.

Watson is one of the biggest draft risers of the 2022 class. After a superb Senior Bowl week, the former North Dakota State star shot up draft boards. Being selected by GB with their MVP QB & desperate need for WR help cements him as an upper echelon WR in the 2022 class.

Wow! Things have certainly changed drastically since Thursday afternoon. Once considered a top 3 pick in Superflex leagues, I was able to snag Willis at pick 15. Getting the second QB in this class with a second-round pick, I am thrilled. Sure, there is a chance that Willis never amounts to much in the NFL, but the gamble on him in the second round is so easy to justify. He easily has the highest fantasy ceiling of any QB in this class. Willis goes to a stable organization where he can learn under Ryan Tannehill during his rookie year and develop slowly. This was a very easy selection for me.

This is a steal, in my opinion, as White is being prepped to take over as the lead RB for the Bucs. Fournette signed a 3-year deal, but he can be easily cut a year into it as most of the guarantees are only for year 1. White does everything Lenny does and is a great handcuff for when Lenny eventually misses a game. Give me a future RB1/2 rather than a lottery pick of WR.

There aren’t many wide receivers in the middle-to-latter part of this draft with as much upside as Alec Pierce. He has an alpha receiver build and can win downfield. Forget taking a chance on the “gadgety” roster clogging receivers yet to come and swing for the fences with Pierce at this point in your rookie drafts. I think he will start right away and be a productive target for Matt Ryan.

One of my biggest post-draft risers is James Cook, who I now consider a first-round pick in Superflex rookie drafts. Not only did he land with a top 5 offense in Buffalo, but they spent a second-round pick to acquire him. He will be a vital part of Josh Allen’s passing games and should stay on the field on most downs. The safest running backs in fantasy are those PPR monsters, and Cook joins that club. He can also beat defenders to the edge as a capable runner (6.6 YPC at Georgia). This will likely push Singletary out of Buffalo and lead to an expanded role in 2023 for Cook.

I am skeptical of these QBs, as the NFL has clearly told us it’s not a strong class based on how they were drafted. But, it is a Superflex draft, and it’s not as if the remaining players at other positions are a sure thing either. I’ll take the upside swing on a dual-threat QB who went to a team in desperate need of a QB and traded up to get him. It may be a train wreck, but Corral is likely starting before the season is over in Carolina.

McBride was the consensus top tight end prospect in this draft class, and his second-round draft capital did little to change that evaluation for me. He is a talented receiver who can excel in the red zone, but he’s also not afraid to do the down and dirty work to earn valuable reps. In Arizona, he finds himself inserted into a potent offense orchestrated by mastermind Kliff Kingsbury. He will also benefit from serving an apprenticeship with standout tight end Zach Ertz, an ideal mentor. That’s an awful lot of value for the investment of a late second, and I am more than happy to collect.

At the back end of the second round, I don’t mind trusting the talent of Isaiah Spiller. Though he didn’t get the draft capital most analysts expected, he still does have a path to fantasy production. The Chargers are desperate to find a 1B to Ekeler, and Spiller has the rushing ability and talent to fill that role. Spiller could be a serviceable low-end RB2-flex to start but could have a three-down workhorse opportunity post-Austin Ekeler era.

It’s not often you get to draft an SEC WR at the 2.10 coming off a 1,300+ yard season. Wan’Dale Robinson is a dynamic playmaker with the ball in his hands. He is able to beat you with speed (4.44 40 yard dash) or with a sudden change of direction to create separation. Early round 2 draft capital shows the NY Giants love his talent, expect Robinson to be fed targets.

Most think this was a crazy pick and a reach. It may have been early, but I really like Thornton as he has blazing speed but is not just a deep threat. He is tough at the catch point and can go over the middle. Thornton should make the offense more dynamic, and he has the draft capital.

Wow. I don’t expect to get Pierce at the 2.12, and I will be stoked if I do. He has as clear a path to a workhorse role as any running back in this class- there are bodies in that room, but no one with any significant value. Sure, it’s a rebuilding team, but the offense could be better than expected, and Pierce has a well-rounded skill set that should keep him on the field even in negative game scripts. Combine that with his tough running and nose for the end zone, and Pierce could be a plug-and-play RB2/RB3 for your dynasty team this fall.

That closes out Round 2 of the post-NFL Draft Superflex Rookie Mock draft. Any surprises? Who are we too high on? Who didn’t we select that you would have?

Rookie drafts are approaching fast. Be prepared with the #1 rookie mock draft tool on the market. And it’s FREE. Available for iPhone and Android. Become a DynastyGM subscriber and sync your leagues with the Dynasty Nerds App to mock draft your actual teams.