The Dynasty Nerds team is here with Superflex rookie mock 2.0. Who hit and who missed? Leave a comment and let us know. 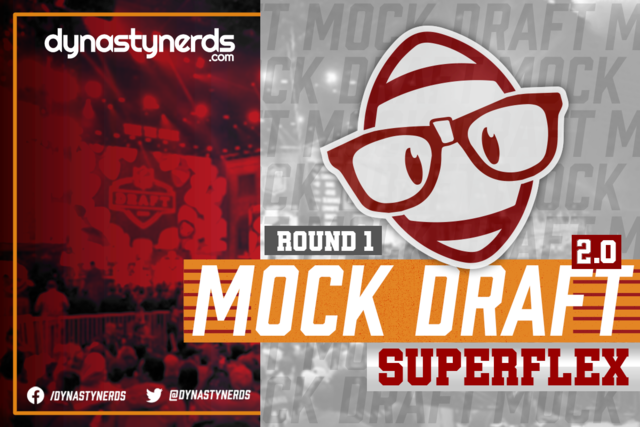 The Senior Bowl is in the rearview mirror, and we are looking forward to rookie draft season. In a year when the quarterback class underwhelms, we could get some surprises early in the rookie drafts. This week, the Dynasty Nerds team breaks the huddle with two- 2 round mocks drafts, a 1QB, and a Superflex.

Post Senior Bowl hasn’t changed much for this quarterback class. No one individual stood out or elevated himself enough to warrant not taking Breece Hall at the top of the class. Even in Superflex leagues. Hall has all of the traits you look for in a bellcow running back at the NFL level. He led the nation in broken tackles while also falling in the top ten in missed tackles forced. The man is elusive. On top of that, he is a more than capable pass-catcher, hauling in at least 20 receptions every year of college. Take Hall at the top of your rookie draft and enjoy having an RB1 on your team.

There are two locked-in studs in this draft: Hall and Wilson. There are several more guys with high-end traits who are likely to have favorable outcomes- Spiller, Burks, London, Willis- but I’m taking my surefire hits before dabbling in potential, regardless of positional value, particularly without landing spots. Wilson is plenty fast and has elite route running, ball skills, and RAC ability- everything I want from a modern NFL WR.

I’m perfectly fine with grabbing a WR who has a potential path to be a WR1 in his career. Right now, it seems like a toss-up between Wilson and Burks for who will go off the board first. I think Wilson has his skills honed in and is more ready for the pros at this point. On the flip side, Burks has all the athleticism and measurables that anyone would want. At Arkansas, he faced some of the most difficult competition in the SEC and still managed to dominate. Coming in at 6’3″ and 225, he has the tools to become an alpha receiver in the NFL.

The first quarterback off the board in a rookie Superflex draft doesn’t come off the board until the 4th pick? Say it ain’t so! Now, I know people bumped Malik Willis up their boards after his Senior Bowl week. For me, it’s still Kenny Pickett off the board first, and I’d still take him ahead of the three players drafted here so far. True, he does not have the same fantasy upside as Willis, but I think Pickett is much more NFL ready. In order to score fantasy points, NFL coaches have to trust you to get on the field and succeed, and at some point in this process, we have to take off our fantasy hats and put on our NFL coaching hats when evaluating these players. I think Pickett is a much, much safer NFL prospect than rolling the dice on a very inconsistent Willis, and I do not like to bet on small-school outliers. I wasn’t a Trey Lance fan, and I’m not a Malik Willis fan.

While I still like several RBs and WRs on the board, I can’t pass up the opportunity to add a possible franchise QB in a Superflex league. If I am going to swing and miss, I will do so at the QB position every time. While this QB class hasn’t jumped off the page for anyone yet, I believe Corral has all the tools to become a promising young QB in the NFL: accuracy, mobility, poise, awareness, and leadership. While he lacks the elite size you may be looking for in a prospect; Corral checks a lot of boxes. Some owners may aim for the home run and take Willis here, but I worry about his transition to the NFL. Hopefully, Corral can land on a team with a quality coaching staff that will help him with the transition and continue his development.

This came down to Sam Howell and Isaiah Spiller, and I decided to go with my current QB1 in the class. He measured in at 6’0 ¼” 221 lbs at the Senior Bowl. That makes him one of the heaviest quarterbacks in this class despite being under 6’1″. I believe he is the most complete prospect in terms of passing ability. The physical tools are all there to go along with functional mobility and athleticism. Getting Howell at 1.06 was a best-case scenario for me.

London has a surprisingly quick release of the line for a man of his size, allowing him to beat man coverage regularly on his crossing routes. His legs don’t move as fast as Treylon, but he doesn’t have to with his wingspan and step distance. London eats up space in just a few steps, which, when paired with his above-average hand-fighting, good release, and great manipulation of leverage, makes for a nasty possession receiver. One of his qualities that I appreciate (not because it makes him a better receiver, but because it will play a factor in his snap counts) is his willingness and complete dominance as a blocker. His frame and strength make him an excellent blocker. Although London certainly has holes in his game, he ticks the box for all of the important things I look for in a receiver: Hands, YAC, release, leverage, and a full route tree.

After Dom sniped me once again (this is a usual happening in my leagues with him), I had to go with the 2nd best RB in this year’s draft class. That’s Spiller, who has terrific measurements, is entering the draft early at age 20 and should be a starter on your dynasty and his NFL team next year. He’s got good hands, nice agility/cut moves, and solid speed/burst. I can easily see him becoming the best RB of this class. I’m not comfortable reaching on another QB or WR, and RB is so valuable in dynasty that it’s hard to replace a great rookie back.

Part of me is shocked to see Malik still here, and the other part understands the trepidation. There are a lot of red flags, both on film and paper, that have decision-makers concerned. Malik Willis is undoubtedly a projection and will require a leap of faith from an NFL or Dynasty GM. That said, I’m willing to take the swing on Malik’s rare physical gifts and upside in the late first. The NFL GMs won’t be so lucky after Malik’s Senior Bowl performance. The Senior Bowl is only one data point, but it was hard to watch that game or watch those televised practices and not feel that Willis was the most gifted thrower and athlete present. His accuracy is a point of concern, both on film and as the pre-draft process began rolling. However, we should make very few assumptions on his decision-making or game management skills based on his time at Liberty. Saddled with an abysmal offensive line and very few playmakers, Malik shouldered an unfair burden for the Flames. He will need time to develop, but his playmaking ability allows him to start games and produce points and wins right away.

The 1.10 slot in this exercise feels like a good spot to take the nations top running back and Doak Walker winner, Kenneth Walker. According to Pro Football Focus, Walker forced more missed tackles than anybody in the country in 2021 (89). He’s a sturdy 210 pound running back with solid footwork and excellent change of direction laterally between the tackles. Kenneth Walker is one of the few running backs deserving of first-round rookie draft consideration in Superflex leagues.

It’s only been about a month since the National Championship game. Jameson Williams tore his ACL in that game, and already I think we’re seeing an “out of sight, out of mind” effect on his ADP. I hope it continues as other prospects continue to rise throughout the pre-draft process because I would love to get a discount on my 2022 WR3. Williams is blazing fast. He was expected to run a sub 4.3 40 at the NFL combine, and some expected him to be the first WR taken in the NFL draft as a result. He is also an underrated route runner who consistently created great separation this year at Alabama. I see some concerning technique patterns in his catching, specifically that he often lets the ball into his body. But ultimately, with his speed and route running, he is a very high upside prospect, and I love getting him here at 1.11 in this exercise.

Chris Olave is one of the safest prospects available in this class. He is so technically sound, in fact, that many expected him to declare for the 2021 NFL Draft as a junior. The Buckeye utilizes crisp footwork to execute top-notch route execution. This sort of attention to detail is precisely what NFL scouts covet; thus, an investment of significant draft capital seems a near certainty. To snag a player of this caliber with the final selection of this mock’s opening round feels like a real feather in my cap.

That wraps Superflex Round 1 v2.0. There were some surprises at the top of the draft. Who was the biggest reach? Leave a comment and let us know.