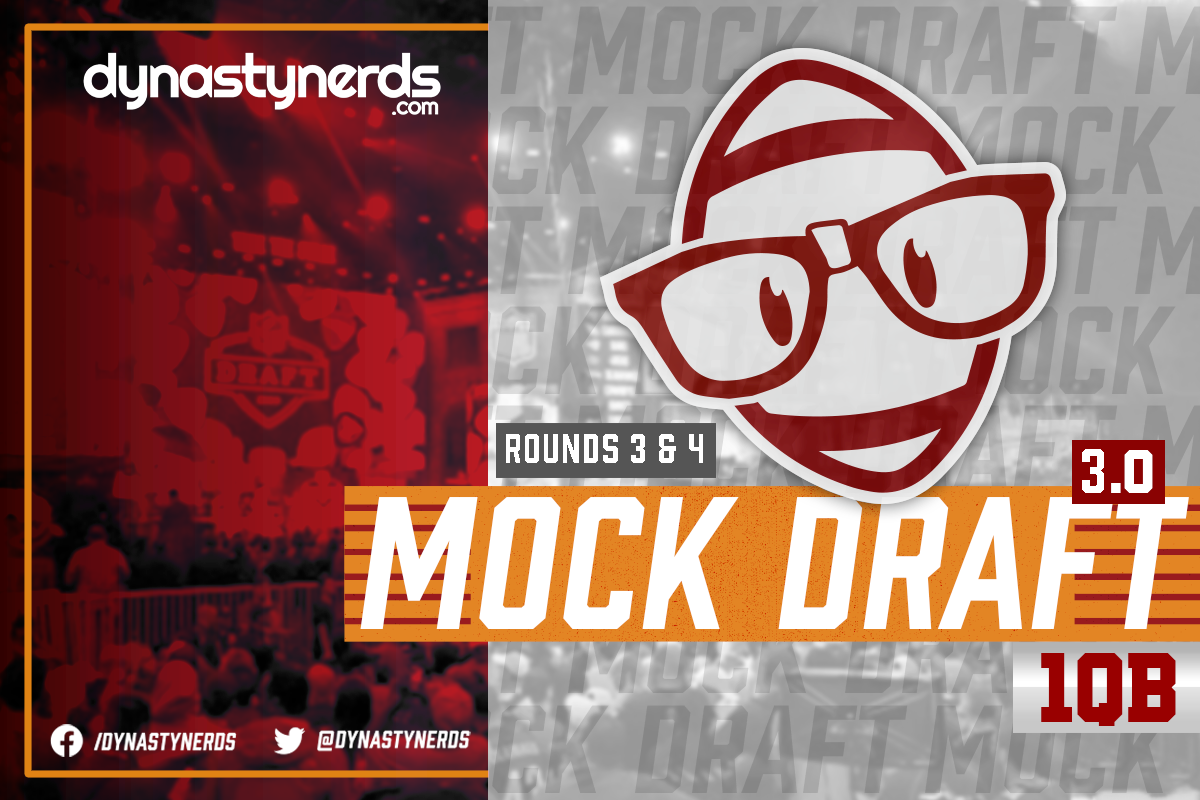 The Combine hype is dying down. We wrap up the Post Combine Rookie Mock Draft with rounds 3 & 4 of the 1QB mock. You can find Round 1 here and Round 2 here.

**Note: This draft was submitted before the TAMU pro day, where some questions arose about Jalen Wydermyer’s athleticism. We chose not to scrap the mock.

After missing all of his junior season with a neck injury, Ross returned to Clemson for his senior year. In a down year for Clemson, Ross showed flashes of his freshman and sophomore season. At 3.01, Ross is a low-risk/high-reward play.

One of my favorite sleeper candidates in this class, Keaontay Ingram, is a guy I have been getting in the 4th round of mock drafts all offseason. Any time a guy is this big and can also catch passes, I’m interested. He is not expected to be drafted until Day 3, which generally doesn’t lead to immediate opportunity. But I like swinging for his 3-down upside this late in the draft.

I’m rolling the dice on the do-it-all wide receiver from Boise State. Deebo Samuel showed the value of a wide receiver who can be used all over the field. I considered going with a tight end here, but with Tre McBride off the board, I decided to go with the next name on my WR list.

A 4-star Alabama recruit who was buried behind Josh Jacobs and Najee Harris, Ford eventually transferred to Cincinnati to get some playing time. He has natural hands and can create problems for defenders in space. He lacks true breakaway speed, and his vision in a gap scheme is mediocre at best, but his pure athleticism should be worth a gamble in the 3rd round.

Jalen had a good combine showcasing his strength, speed, agility, and good hands. It may take a year or two of NFL coaching to turn him into a quality NFL starter, but I’ll take that this late in the draft. Most of these guys won’t become much in the NFL, so to get a potential TE2 this late in the TE-wasteland position, I love it. Wydermyer should start Day 1 on passing downs.

Badie’s profile has its share of positives and negatives. With over 1,900 scrimmage yards in his senior season and 200 career catches at Mizzou, Badie put checkmarks, even exclamation points, in almost every production-based analytical box. He is a very average athlete for his size. Undersized at 197 pounds, Badie’s film shows a more physical runner than his listed weight.

Big, tall, and fast, Pierce was one of the true winners of the NFL combine. It is easy to overlook him in a class dominated by quality WRs. However, he has all the skills to be a true weapon in the NFL and on your Dynasty squads. Desmond Ridders no.1 will surely find a new home during the middle rounds of the NFL draft.

Howell had great production on a talented team in 2020. His passing numbers dropped with a mediocre team in 2021, but he exploded for over 800 yards rushing. Big arm. Check. 30+ starts. Check. Plus mobility. Check. Sign me up in the back half of Round 3.

Late third round, in my opinion, is the perfect spot to take a QB or TE with upside. Pickett is the only one at 3.09 who may be given a legitimate shot to start on Day 1. Sure, his hands are small, but he is also an accurate passer, and, although he doesn’t rely on the run, he can run the ball as well.

Isaiah Likely checks so many boxes as a tight end prospect. He has one of the earliest breakout ages in this class at 20.3 (86th percentile) while finishing with at least a 25% receiving yards market share in each of his final two seasons. He also leads this class with a Receiving Yards per Team Pass Attempt average of 1.95, one of the most predictive metrics for receivers.

By the end of the third round of our rookie draft, the talent pool is starting to run thin. So finding a player with bellcow size at the running back position is truly a blessing. Harris measures in at 5’10” and 221 pounds. This is a perfect size for an every-down NFL back. He had an extremely productive 2020 season, and we can hope he can return to that form. This late in a draft, you cannot ignore the upside.

Ealy has an opportunity to be very successful in the NFL as a change-of-pace player. I think it is possible at times, he could handle a full workload. Ealy is an explosive runner who has some of the best footwork in the class. While he could work on his pass blocking, he is an excellent receiver.

Melton has elite speed, special teams ability, and an opportunity to see the field right away and earn a role in the offense. This late In the draft, you want to draft elite traits, and Melton has that with his speed.

Pierre Strong tied for the best 40-yard dash time among running backs at 4.37 and showed great explosiveness with his vertical and broad jump numbers. He’s big enough to handle work between the tackles. If he lands in the right system, he can be a very dangerous one-cut back in a zone run scheme.

Kennedy Brooks could wind up as one of those players who burst on the NFL scene. He lacks prototypical starting back traits. However, there is some Myles Gaskin to his game as a productive back over a short span. He will need to land in a situation with an injury-prone starter, a starter on thin ice, or a team looking for a committee approach in the backfield.

With an impressive combine performance under his belt, CA3 could see his draft stock incline. A shifty speed receiver, CA3 will likely be looking at a special teams role for the beginning of his career but could eventually see some more time in the slot in the case of injury or illness. Either way, I’m the 4th round of a 1QB draft, I’m happy to take a flier on the most agile receiver in his class.

Haskins has great size for being an RB. He didn’t play a ton at Michigan, but that doesn’t mean he can’t be a player in the NFL. Haskins completely broke out in 2021 by rushing for 1,327 yards and 20 TDs. He was named first-team All-Big Ten and Michigan’s Offensive Player of the Year. This downhill runner needs a zone rushing scheme that is power-heavy rather than pass-heavy.

Impressive at both the Senior Bowl and the Combine, Dulcich has been rising throughout the predraft process. A detachable TE, Dulcich is a promising route runner and maintains good balance and body control at the catch point. Additionally, Dulcich is a dangerous weapon after the catch, possessing both the lateral agility to make defenders miss and the speed to make it hurt. Dulcich will need to become more physical but is the most polished pure receiver amongst the TE group.

Even in a 1QB league, finding a potential 1st round NFL QB in the 4th round if your rookie draft is a steal. Ridder is big, fast, and has a lively arm. He was a proven winner at Cincinnati and will be an intriguing proposition on draft day. I have seen intelligent analysts rank him anywhere from QB 1-5 in this class. His rushing upside alone justified this pick for me.

We have seen quite a run on RBs in the final two rounds. Corral is the QB1 on a lot of draft boards. He checks a lot of the boxes that Howell did for me. He will get an opportunity to start sooner than later.

At this point in the draft, it’s more miss than hit, but TE is one of those where you might find a decent gem late in the draft. Woods has massive size and impressive athleticism, which translates fairly well to fantasy success at TE. A converted QB, he was named first-team all ACC conference last season. He’s a pretty good gamble in the 4th round.

At a UTSA, he accounted for over 30% of the team’s total yards while averaging an impressive 1.75 total yards per team play – second in this class only to Breece Hall. This late in the draft, I would much rather go after a prospect that was productive every single year in college. However, McCormick is not the most athletic running back, which will likely limit his upside at the next level.

As we reach the final picks of the rookie draft, I like to focus on players with upside. The most upside this late can usually be found at the running back position. Chandler profiles with the right weight for an NFL running back. He also ran a blazing 4.38 at the combine. A fast back with speed might be the right combo to be the next Elijah Mitchell in a zone running scheme.

Thanks for tuning into the Post Combine Mock Drafts. You can find the Superflex mock here: Round 1, Round 2, Round 3 & 4.

Najee Harris: Should I Trade or Should I Hold?
Dynasty Impact of NFL Free Agency on Wide Receivers
Training Camp Sale!